This past Saturday, fifteen ladies gathered in the brisk morning light at Carbon Connection in Carlsbad to head off on an adventure.  There were four smart women who chose to participate in the beginner route, which headed up through Camp Pendleton and San Onofre for a round trip total of around 45 miles.  Then there were the other eleven who were allotted their one mile on the coast before heading up and out toward the wilds of the Vista/Valley Center/Bonsall area.

Whether you chose to do the 40-ish mile route or the 60-ish mile route, your first 20-odd miles were going to be primarily uphill.  With Strava segments on this route with names ending in “hill of suck” and “ball buster”, this was going to be no walk in the park, no matter what speed you took at it.  The advanced and intermediate groups climbed with aplomb, with the reward of even more hills awaiting them once they completed the first set.  This route was based on a ride Team Fun member Heather Krauss took a few of us on one of our Wednesday rides back in the fall, and she called it the “No Whine” ride, which is puzzling, because if ever a ride was going to inspire whining, this one would be high up there on the qualification list.  When a good friend of mine took me on my first ride to Bonsall, upon hearing me moan and groan, he quoted the Wizard of Oz line that titles this post.  No indeed, this is not Kansas (or the coast) anymore!

The main highlights of this ride, in my opinion, is the traverse on North Twin Oaks Valley Road (over five miles of rural road bliss!)  The following pictures are from this road.  At one point, there are some “private road… blah blah blah” signs, but while rider beware (the road is very potholed), I have never had any trouble back there with access.

Some of us clearly know how to have more fun than others! 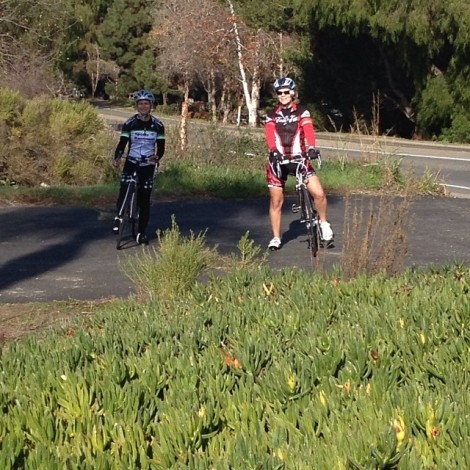 Ellen and Shannon on a break.

I think I made the claim that none of the climbs were steep. I should probably NEVER be believed.  I still don’t remember this one.

At the end of North Twin Oaks, the rides were to diverge – the intermediate group seeking fewer miles were to head back to the coast, while the advanced group continued on to my next highlight of the ride, the West Lilac ascent – off and on climbing (mostly on) for a good 9 or so miles.

I should say, the plan was to continue on to West Lilac.  With some mechanical difficulties and prior commitments, somehow I ended up being the only one standing where West Lilac meets Circle R – the whole traverse of West Lilac as it crosses the I-15 east to Circle R has some of the best rollers around.  And while you’re enjoying the rollers, you get treated with awesome views.  You might also have the opportunity to pilfer some citrus here and there, but I had no partners in crime.  Next time!

I finally met back up with Jill and Heather at the bottom of Circle R, and we had some fun battling hunger pangs on the long, hilly ride back to Carbon Connection.

The winter is a great time for exploratory rides, especially inland, where the summer temperatures can be formidable.  Be on the lookout for more adventurous rides with Team Fun:  possible routes include De Luz Canyon, Kitchen Creek, and alternative ascents of Mt. Soledad.

So go ahead and load up on those cookies – fuel up for our adventures ahead!

One response to “Team Fun Weekend Ride – December 21, “Toto, I’ve a feeling we’re not in Kansas any more.””