I had only ridden up Mt. Soledad once before this past Tuesday, and since it was the Via Capri route, I pretty much swore off that mountain for good.  Each turn of the road brought me a more frightening pitch, and by the time I reached the top, I pretty much just wanted to cry.  Then I had to ride to Point Loma, up the hill from the tide pools, and all the way back home.  I stopped and actually cried near the bike shop on Santa Fe (somewhere in the mid-50 mileage range).  David went into the shop and bought various jelly-type snacks to offer me, but I waved them off and growled.  It wasn’t pretty.

So it was I suppose  a little odd that I was so anxious to try out a route provided to me by Michell, the person I consider to be the local expert when it comes to cool mountain rides (or any rides, really).  I was enticed by the claims of amazing views on an off-beat path up the mountain, and, sometimes when there’s enough distance between you and a scarring event, it loses its power.

We were planning this ride for a future Team Fun Saturday ride, so I thought it would be best to try it out before subjecting the rest of the team to the route.  So this past Tuesday morning, I gathered up the willing brave (David, my husband; Achim, fellow team mate Heather Krauss’ husband; and Jill, cycling ambassador extraordinaire) and headed down to La Jolla with tiny instructions written on a couple of old business cards (and back pockets absolutely stuffed with snacks).

We started the ascent on the right path, but pretty quickly realized I was missing a key step on the route.  We kind of got a little scattered, although Jill and I stuck together as I reviewed the map and remembered the missing street I failed to write down (Al Bahr Dr).  Once you get on the right path, generally you just make slight rights from there and follow the coolest route you can imagine – tunnels, bridges, gates, chopped up pavement, jaw-dropping views … and then you pop out near the top of Via Capri – just a little steep descent down a dirt path and you’re yards from the top.

I have hired Jill as my personal photographer, so here are some of her shots from the ascent. 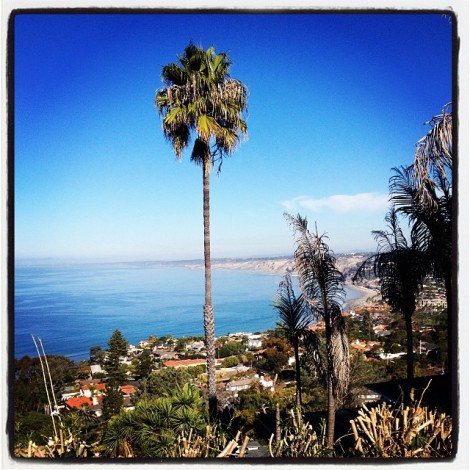 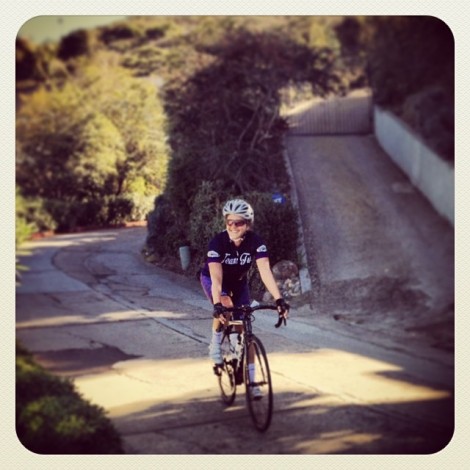 About halfway up the route, who should we run into but the famous Michell herself!  It was a serendipitous event for more than one reason, but mainly for the basic fact that we may never have made it out of the labyrinth of La Jolla side streets otherwise (Jill would still be snapping shots somewhere on a dead end street, and I would have starved to death long ago).  Some of us enjoyed a snack at the top, and then Michell led us down the mountain to the start of our second ascent (this one a much more direct route up La Jolla Mesa to La Jolla Scenic Dr).  We enjoyed yet another snack, while Jill took some more photos. 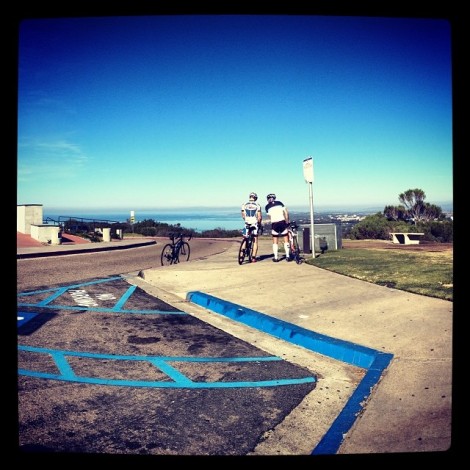 One would think with all the climbing on the way there, that the way home would be somehow magically all down hill.  No route is ever downhill in San Diego County (or so it would seem), and we had to put out a strong effort to return to Carlsbad.  With all that climbing, some of the team found it impossible to make it all the way home without some nourishment (namely, me – Achim and I stopped for lunch in Encinitas; Jill rides on love alone, I think).

This ride, especially the first serpentine ascent up Soledad, has instantly become my current favorite ride – adventure, views, few people and cars – it has it all.  I love it so much, I can’t wait to do it again.

Will you join me, next Saturday, January 11th @ 8:00 am at Carbon Connection in Carlsbad?

I promise, I won’t get you lost.