While I’m sitting here listening to the rain pour down on yet another day I cannot ride, I thought it was a perfect time to reflect on last Saturday’s Team Fun “Adventure Ride” to Cabrillo National Monument.  Tapping out at just about 80 miles, this ride is part of our “Adventure Ride” series where we offer folks an opportunity to push the boundaries on a weekend ride and achieve bigger goals.  These rides provide an alternative to the pay-to-play hosted century rides (although we like those, too).  In a smaller venue we hope to provide each other support on rides you wouldn’t normally take on on your own:  Laguna Mountain, Coronado Island, Palomar Mountain, and whatever else we might dream up!

This particular ride, the ride to Cabrillo, is one of my absolute favorite rides in San Diego.  As my husband can tell you, I used to despise riding south, especially through La Jolla, Pacific Beach, and Mission Beach – as I felt that it was one of the more dangerous things I could choose to do.  From personal experience and learning from others, we’ve laid out a fairly safe, yet awesomely scenic route to Cabrillo.  As long as you don’t decide to throw in a trip up Mt. Soledad on the way, it’s a pretty easy route elevation-wise.

Although we were disappointed that a lot of folks had to drop out at the last minute, we ended up with a sizable group of intermediate and advanced riders looking to make it to Point Loma – some would take the train back, and others were looking to the go the whole distance. 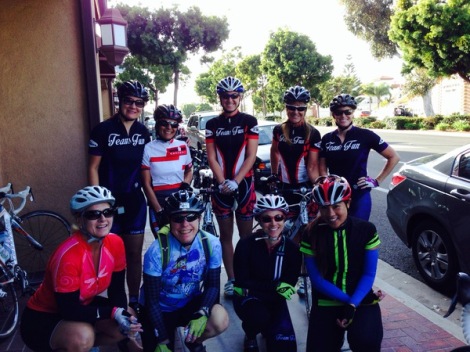 Since it was a combined ride, we had Jill lead the group off in the direction of Torrey Pines, while Heather and Julie were to be sweepers in the middle/back of the pack.  With a long ride like this, it’s crucial to balance the speed – you don’t want to start off too fast, or push too hard in the beginning, yet at the same time, you want to be able to keep your pace consistent.  We were hoping to set everyone up for their own success.

The first challenge comes in the form of Torrey Pines.  I have to say, while I have heard some of you ladies express fear or concern about climbing Torrey Pines in the past, it didn’t seem like anyone struggled at all – when you have a much bigger challenge in front of you, things that seemed hard before suddenly seem rather easy.  As I crested the hill and reached the “banana stand” (the Anywhere Bicycle Repair stands that we love), I saw a bunch of fresh faces all around me looking completely ready to tackle at least another 60 miles, if not more.  Luckily for all of us, Suzanne, they did indeed have more than one banana! 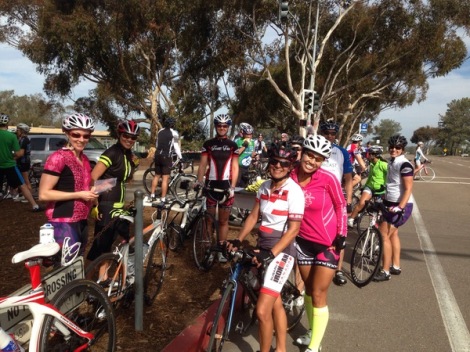 The gang at the top of Torrey Pines 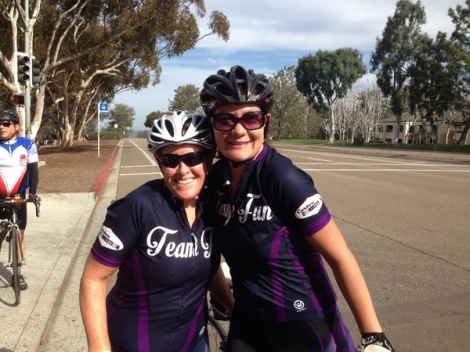 Kim and Christa pose at the top of Torrey Pines.

Kim wonders when we are going to get started again! 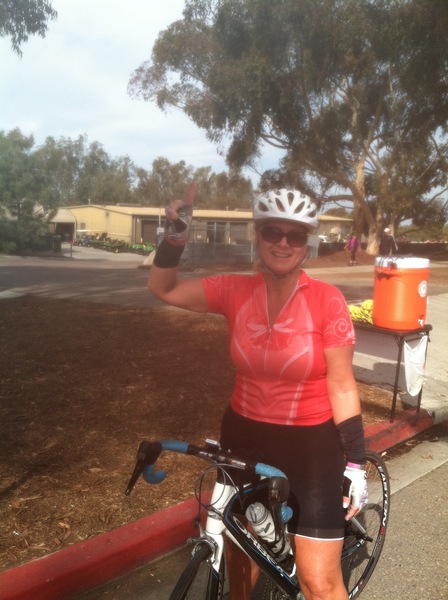 I enjoy the next part significantly more on the way down (with it being downhill and usually a beneficial wind), and not so much on your return trip – after heading around UCSD campus on Torrey Pines Road, you duck down Gilman at blazing speeds, hop on the Rose Canyon Bike Path (more fast speeds, although you have to use care here since the path is well-used and at points, narrow), keep flying down Santa Fe, until you head over on Damon towards the Rose Creek Bike Path in Pacific Beach.  Now, the bike trails in San Diego proper, in my opinion, leave a bit to be desired – and if it weren’t for the trail angels like Michell, out there sweeping them off for us, I can only imagine what state they’d be in.  However, while you are thinking this path might be a little too south of sketchy for your tastes, the alternative is generally less appetizing – this involves risking your life amid some pretty heavy, non-obliging traffic through PB to get to Mission Bay. Every previous time I’ve done this ride, I’ve gone the other way and each time I swore I wouldn’t do it again.  So, I finally listened to myself and appreciated the outcome.  Sure, there’s some odd stairs and you’ll never know who you’ll run into down there, but it’s more relaxing than the nail-biter on Mission Bay Drive.

Everyone’s spirits seemed to lift a little as we entered Mission Bay Park proper – finally recognizing some familiar surroundings, I think it dawned on everyone how far they’d come.  This park has palpable cycling energy.  The traffic was very calm, with a triathlon finishing just a short while before we came through.  We continued on bike paths by crossing Sea World Drive on Friars Road, and immediately jumping onto the bike trail that follows Old Sea World Drive along the inlet – which that morning seemed to contain just dozens of egrets (Jill, they really were there – it wasn’t just my imagination).

From the vantage point of Old Sea World Drive, we could finally see our destination – Point Loma was just a few short miles away, and after a very brief trip on Nimitz, we turned off onto Catalina and started the long, slow, gradual climb to the end of the point.  I was hoping for just a bit more blue skies and sunshine (you know, for the pictures!), but given our weather for the last three days, I really can’t complain! 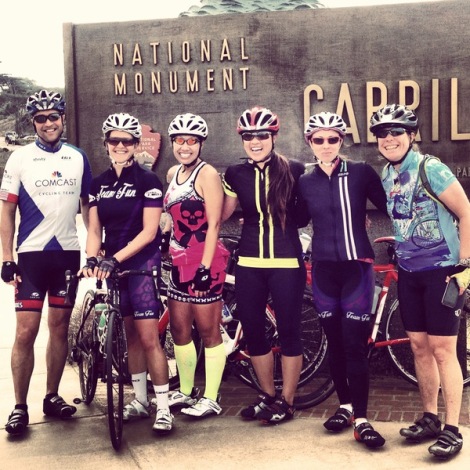 Once you reach a certain high point on Point Loma, the views open up on both sides, your speed slows, and your eyes feast on the views of the San Diego skyline, the bay, and the ocean all around.  A couple of our “try hards” (that would be you, Jill and Achim) decided to give the Tide Pool hill a go, while the rest of us in the forward group pushed on up into the park to sit on a bench, eat some hard-earned snacks, and take in the view – oh yes, and of course, pose for pictures! 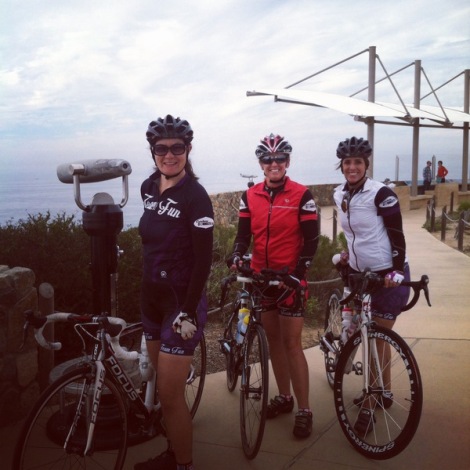 Christa, Julie and Denise at Cabrillo

Awesome view towards San Diego Bay and the skyline 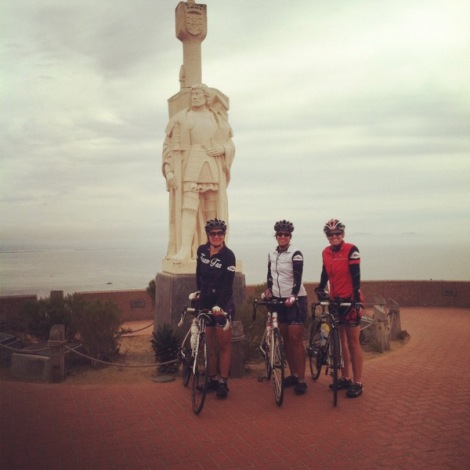 Christa, Denise and Julie at the Cabrillo statue

A second group including Julie, Denise, and Christa were just entering the park as we were leaving. These three would later enjoy a train ride back, while the remaining seven of us started “the long ride back” – which really, didn’t end up being so bad at all.  We took a nice, moderate pace back through Mission Bay Park to finish out the usually difficult miles hovering around the 50-55 mark, slogged back up the Gilman hill, and had the last significant climb back up into Del Mar (that hill always seems like a torture!!).  We reached Solana Beach (familiar ground!), ran into Michell who was waiting to ambush us for both pictures and the return of her Cabrillo pass, and had a mere 15 miles or so left to go.  As Jill always likes to tell me when I start whining during a century – “It’s only 15 miles (or 20 or 30, or whatever’s left)!  You do that all the time, like  every day, it’s nothing!  It’ll be over before you know it!”

Jill, Achim and Suzanne in Solana Beach on the return trip.

I got a little frisky somewhere in there and sat on somebody’s wheel for very little reason, and then I became consumed with hunger – which, when you ride with me long enough, you’ll realize really does happen.  Heather Krauss is convinced I never eat on rides – well, I either take care of it on these rides or I end up a little bit of a crazed maniac.  At a certain point, I forgot everything except my desire to get something in my belly – I imagine I wasn’t the only one at that point, as I heard a lot of desirous talk of “burritos” around Solana Beach, and moans as we suggested what delicious things we might find in a burrito!

There’s no denying you earned your burritos THAT day girls!

Everyone demonstrated great attitudes that day, especially when considering that was the longest ride many of you have ever done! (And for some of you, by far the longest).  Either you are very good at hiding your pain, or you just flew through that like it was nothing at all!  After I completed my first ride of that length, once I reached “the store” on the route (this was in Idaho), I propped my bike up, bought a bag of potato chips and coke, and refused to move until they were thoroughly consumed.  Actually, I think I then laid down on the cement and moaned for a good while before I could be convinced to return to my bike so we could ride to the house.  I have been known to have bike throwing incidents and other tantrums, and you all – well, you all were perfect cycling group citizens, completing the ride like it was nothing at all.

Congratulations goes out to:  Tina, Kim, Suzanne, and Lauren for letting Jill and I drag you on one of our favorite routes.  Props to Christa, Julie and Denise for enjoying the Point and being smart enough to return by train (and also thanks to Julie for helping others find the train).  Melina was able to join us to Cabrillo, but due to illness took an early turn around to the train.  Kim and Gwen were also struggling coming off some illness and travel, and we were able to enjoy the ride to San Diego with them.  Judy and Candace helped see us up Torrey Pines, but had to turn around early to cheer on Judy’s daughter at her CIF water polo tournament. 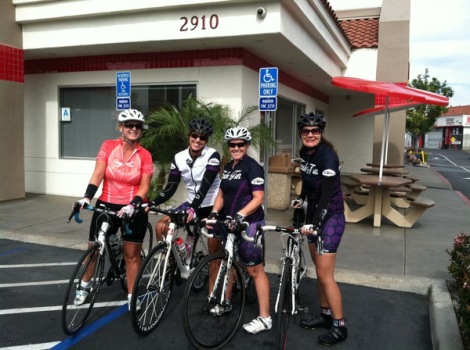 Gwen, Denise, Kim and Christa on their way to the train.

Not to worry – for all those who were struggling with illness, work, or other reasons – we will definitely do this one again if people are interested!  Just let me know which rides are your favorites, and we will get them scheduled.