With a slew of last-minute cancellations this past Saturday, we were down to a core group of ten female riders ready to take on the spiky close-to-the-coast route picked by Jill for her birthday ride.  Aside from the first stretch, this route never seems to be on level ground – and yet, you are never more than about five miles from the coast.  This is a great route if you are looking for an interval workout and live anywhere between Carlsbad Village and Cardiff – pick and choose from the almost 40 mile route, and you’re bound to get a workout in.

Given the paucity of photographs from the A ride (i.e., there are exactly zero), I think we can safely say the A group got a workout.  There were only four women in the A group last Saturday, with newcomer Lauran stepping up impressively.  I was definitely determined to make sure Jill felt like she got her money’s worth in the “short” route (“short” for Jill), and in addition, we had a secondary goal of racking up one or more QOMs for her birthday Strava post.  I am happy to say we succeeded on both accounts.

The morning pretty much went by in a blur.  A few poignant memories include being out of breath with legs burning crossing Leucadia on Quail Gardens and saying, “I think we should recover a bit now,” and Jill demanding, “No, not yet – this part is fun!”  And proceeding down the remainder of Quail Gardens somewhere north of 28 mph.  I remember pleading with her for more respite as we approached the sprint on Mackinnon, but again she insisted on sprinting.  Ouch. My legs hurt just thinking about it.

We had one more sprint throw-down through the back neighborhoods of Leucadia (which garnered the much desired QOMs), and then throttled it back a few notches for the second, hillier half of the ride.  We took a few more speed upticks here and there to keep it fresh.

I’ve got to stop giving B and C groups a 38 mile handicap. You gals have gotten so strong!

Technically I was leading B group on Jill’s BDay route this Saturday, though I really was following much of the time. It’s a beautiful course that makes clear why Jill is now known as the Jillygoat; lovely Carlsbad & Encinitas back roads where every fun descent must be paid for on the next turn (and its following up-tick, which, though aren’t very long, can give Sriracha sauce a competition in term of spiciness). Luckily for me Heather Krauss decided to ride with us (B & C group pretty much rode together until the 2nd Poinsettia turn where our course diverged) and did most of the pulling even though it was her first bike ride in a month. Merci vachement beaucoup, mon amie!

By the time we made it through the maze of Encinitas and back into Carlsbad I was pretty zapped even after having spent most of the first half of the ride drafting Heather. Alas, my smorg-hauler turned back to the coast with Kim at Poinsettia to complete the C route, so long-suffering Susan, Suzanne and De were stuck with a very sluggish leader for the rest of the B ride through inland Carlsbad’s rolling hills. We slung-shot every little dip in the road and even tried to draft a few friendly hikers up Rancho Pancho to Carillo Ranch, then I convinced myself that De’s rear brake can use some unnecessary adjustment just to score me a rest break before the Melrose Dr climb.

By then it had gotten rather hot, I thought, so we opted out of heading west on Faraday and the certain whipping that is Whiptail Loop and went west on Palomar Airport Rd instead. I don’t know how, but Suzanne found the reserve to practically sprint up the last climb of the day on scenic Adams St along the Agua Hedionda while De and Susan hung in the back to make sure that I don’t sneak off and try to catch a bus the rest of the way in instead. I’m telling ya’, I wouldn’t have made it without such attentive ride mates! Thanks, gals! (And thanks Heather for another good ride and Jill for picking the route, too)!

If you are interested in the route, you can find it on Strava:  http://www.strava.com/routes/148187 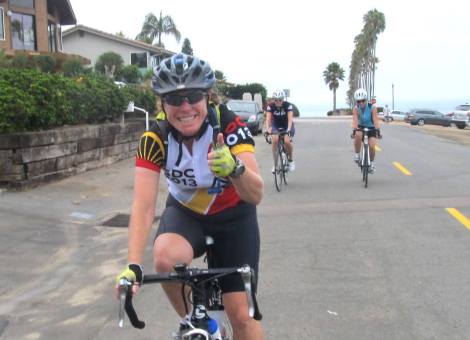 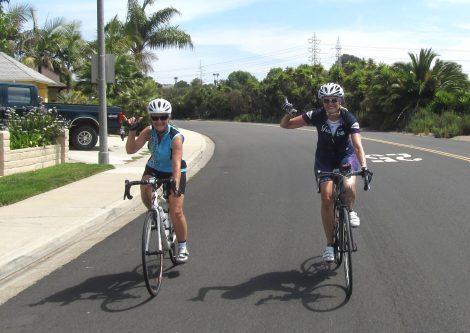