It has become a little bit of a mini-tradition for me to embark upon a climbing challenge during the latter part of the month of July (my personal history on that can be found here).  I call it “mini” because last year I was prevented from tearing my body down foot by foot by a hip injury that did not allow me to even get on the bike, but this year I would not be deterred!  The weather tried its best last week, when we were to kick off the challenge with a 50 mile, 5200 ft climbing extravaganza; but we all decided it was most likely prudent to NOT attempt steep descents on such hills as Double Peak and Mt. Israel in pouring rain and lightning.  I managed to squeak a few rides in that weekend with my husband, who doesn’t understand such phrases as “slow” or “slow climbing” or “taking it easy”.  Fellow Team Fun member Jill joined me on all the other sweat fests during the week when the temperatures and humidity were both hanging in the 85-90 range, quite atypical for our usually dry, somewhat temperate summers.  Even Heather K., after trekking for dozens of miles and oodles of meters up and down in the Swiss Alps joined in the fun after returning from her trip at toward the end of the week.  This is all to say I felt a little less than fresh for the “suffer fest” that was to be the Saturday morning ride.

Now see, we don’t advertise it as such – we like to use euphemisms like “climbing challenge”, but pretty much everyone sees through that to the truth of the route map.  I heard someone say something like, “What diabolical person came up with that route?”  Well, that would be me – and I will say that I even left a few of the worst ones off the route (save those for another day).

I was curious to see how many brave souls would sign up for such a thing, and also secretly hoping maybe no one would show and I could just ride slowly home and enjoy a nice, long nap.  But lo and behold, we had quite the group gathered on Saturday morning at the Java Depot in Solana Beach.  We had ten women in the A/B group, and Kim Z. led out four additional ladies in the C group, which had a very respectable 32-miles ahead of them with a few hill challenges thrown in.

It was already getting a little hot by 8, and I tried to keep the pace mellow and approachable along the coast toward the start of our ascent.  The climbing began around mile 7, and then just kept on keeping on as we made our long, oh so very long, way up to San Eiljo to the Double Peak turn.  By the time you reach the top of Double Peak, you’ve climbed for at least 8.5 miles and about 1500 ft, with the worst, of course, at the end.  I am proud to say everyone made it. 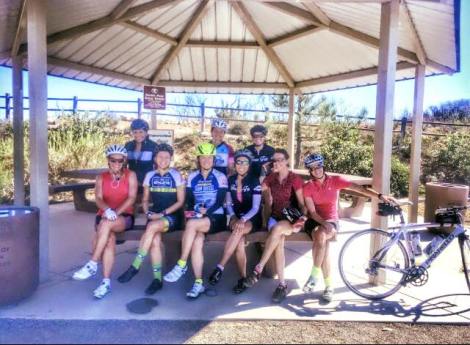 It was at this point that I very easily persuaded myself to completely skip the next climb, which was to descend then re-ascend Twin Oaks Valley Road for about 650ft of added gain.  It was easy to say, “Why?” and answer, “Seriously, I know, why”, at that point, and just descend San Elijo and start the Elfin Forest loop with the offshoot delights it has to offer. 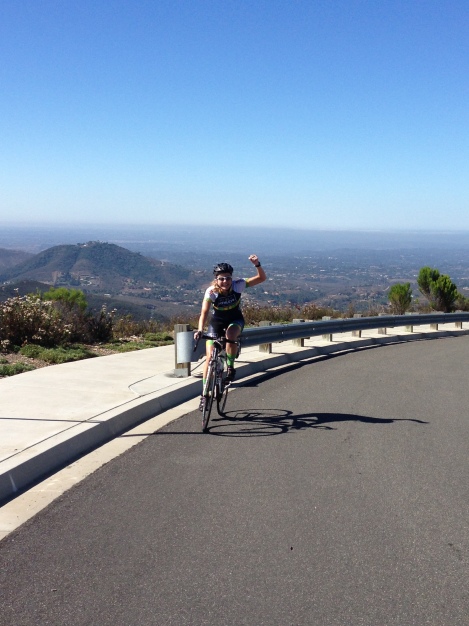 Both groups agreed to this change of plans, so we headed out Elfin Forest Road.  Judy, Janice and I broke off at Via Ambiente, while the others continued around the Elfin/Del Dios loop.

Via Ambiente has always been one of my favorite climbs, mainly because there are few, if any, cars on the road (there are multiple gates).  It’s just over 2 miles with some solid steep pitches and amazing views the whole way.  It just so happens that Saturday we ran into one of the people responsible for the conservancy of that land.  About 2000 acres on either side of Via Ambiente are managed by the Escondido Creek Conservancy.  If you have an interest in such things, they love volunteers, will accept donations, and for those that volunteer, the nice man we met said he would be happy to give a guided tour of the trails in that area.

We were really just buying time to avoid the beast in front of us, but eventually we made it all the way to where you can see the Lake Hodges dam, but there we encountered a gate I’ve never seen locked.  Judy promptly threw her bike under the gate and started climbing through when I said, “Um, maybe we don’t want to descend down that steep grade and stop right at the bottom… I remember this descent, and right where this gate is is usually where I panic and think, “oh my gosh, I might die”.  And Judy said, “Well, at least you’d know you’d stop, you know, with the gate being here.”  So, yeah, I decided I didn’t want to wrap myself around a gate, so we turned around, with me a little more than disappointed that it seems I might be cut off from one of my favorite climbs.  Oh, but we had one more sweet one left.

And see, at that point, you don’t even count the climbing on Elfin Forest as “climbing” – that’s just the way to get to the next gory one.  Mt. Israel – how can a hill so short be so steep and awful??  If you’ve traveled west on Del Dios, you’ve passed this road many a time – it’s the steep one off to the right you probably subconsciously “don’t see”.  And once you’ve done it, you definitely try not to remember it.  Most people I’ve ridden it with think it’s worse than Double Peak.  I tend to agree, although it’s not the worst of the worst (Mountain Meadows, you know who you are).  The steep portion is “only” about 0.6 miles, but it’s unrelenting and, well, when it’s 96 degrees, a little more than painful.  But we found some smiles…

Judy, Janice, and Heather at the end of Mt. Israel Road.

When I describe it here, the casual reader might think, “Hmm, was that only three cilmbs, and they weren’t all that long, maybe she is just dramatic?”  Well, I have been accused of being dramatic a time or two, but this was definitely a difficult ride.  The heat was probably what put us over the edge, and was so intense that we had to stop in the Cielo neighborhood at the nice little cafe they have to rehydrate.  I typically drink one bottle on a 30-mile ride, maybe 1.5 on a 40 mile ride.  I went through 5 bottles that day.

It will definitely be a week to remember, and certainly was a fantastic finale to a hilly week.  I am looking forward to next week’s ride, which is set to be much, much flatter.

Some more pictures from the ride (courtesy of Jill): 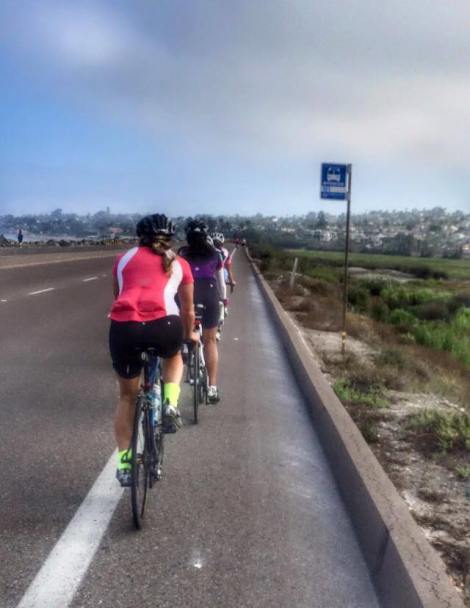 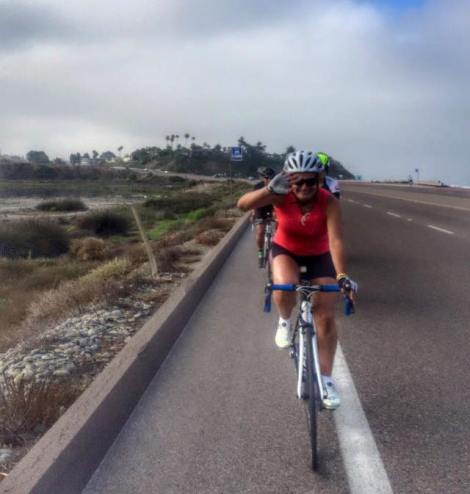 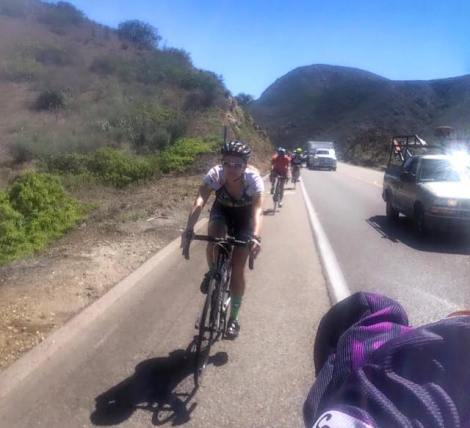 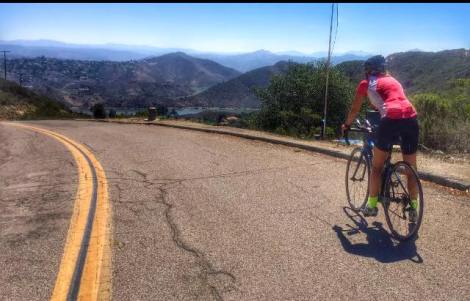 This is the view you get at the top of Mt. Israel.