Yesterday a contingent of Team Fun riders took on the Swamdo, short for “Swami’s Fondo”, this mostly flat 90-mile ride was the Swami’s Cycling Club’s first attempt at hosting a century experience.  The sun was blazing, and the sweat was running out of pores – and that was before the ride started.  The conditions were sure to be challenging, but we had a strong group of women dedicated to riding together and providing the support we needed to make it through to the end.

The ride started out by heading inland on Palomar Airport Road.  The first two groups took off a little faster than our group thought prudent for their expectations on the day, so we were essentially riding on our own from the start. 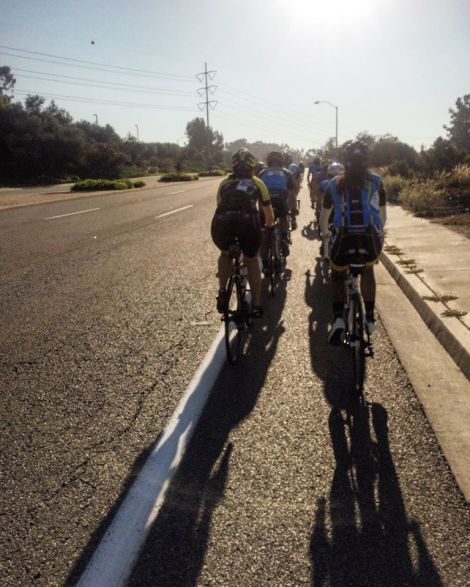 We hit most of the hills on the route heading north on Melrose toward the San Luis River Bike Trail, and we were happy to have a long, flat stretch to relax into a rhythm.  We were planning to try out a paceline, but the bike trail is not the place to do it (as you can see in the picture below, it’s narrow and full of pedestrians, cute kids riding bikes, and all manners of folks with headphones).  We managed an approximately 21 mph pace for the 9 miles to the coast. 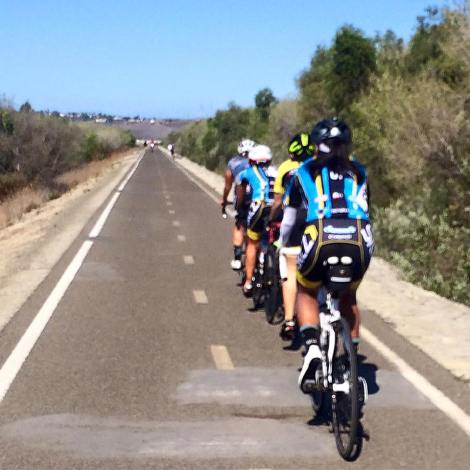 Team Fun on the bike trail

We entered into Camp Pendleton feeling strong, and started our pacelining attempts after the first hill on Stuart Mesa.  We thought it was best to rotate off the front so certain people who tend to hog the front (i.e., me) didn’t crack somewhere along the way to Dana Point.  The night before I was having visions of myself curled up in a crampy ball somewhere in Camp Pendleton far from civilization, and well, I didn’t want that to come to fruition.  We rolled into the Las Pulgas stop for some freshing Skratch and M&Ms before heading out on the flatter stretch to Dana Point.

Front to back: Heather B, Janice, Melina, Sabine and Amada wait at the light turning on Stuart Mesa in Camp Pendleton

A new member, Amanda, joined us all the way through the first rest stop for an impressive first ride with our group.  I assured her our rides were almost never this long, nor so hot – although I can’t promise anything on the heat front.  This summer is seemingly relentless.

I’ve always kind of despised the ride through Camp Pendleton, but the ride through San Clemente on the rollers is probably one of my favorite stretches along the coast.  The beach front cruising between San Clemente and Dana Point is also not to be missed – the water looks a little too enticing.  Our next rest stop was the the Dana Point Harbor, one of the best destinations for a Saturday ride.

Janice, Heather B, Jill, Melina and Sabine at the Dana Point stop.

The Return Trip – sucking it up for 40 miles

The problem as I see it with these northern coast rides, or any out and back really, is that the return trip just seems to load drudgery upon drudgery.  Even though the views are at least as awesome as the ride north, you feel like you’ve seen it a million times, it’s hot, you’re tired, there’s maybe a headwind … it can seem a little endless.  We started our rotation early on, and supported each other as various group members hit their personal wall.  The traffic scene along the coastal towns was mayhem yesterday, with end of summer festivals everywhere and cars paying attention to nothing other than their potential parking spots, but I’m happy to say we all made it back in one piece and none the worse for wear.  Maybe a little overheated and dehydrated, but happy and proud to be done.

Thanks to Swami’s for putting on the event, and to Team Fun member Diana for volunteering at the Las Pulgas rest stop.  A big thanks to the other volunteers, Tyler and Camilla&Family, for manning the rest stops.  Hopefully we will get to do this again in the future and more of you can join in the training rides leading up to the event.