Team Fun loves its sufferfests.  What’s a sufferfest?  I think the name may have originally come from cycling training videos, but we have developed our own definition for the North County area.  We are blessed/cursed with living in an extremely hilly area, and as any experienced rider will tell you, you only get better at hills by doing them!  Typically, for our A group, if the route does not end up at least 100 feet/mile, then we aren’t doing it right.  My goal elevation profile is typically >100’/mile for A, ~100’/mile for B, and ~75’/mile for C, with ride lengths between 30-45 miles.

Why do I say Team Fun loves its sufferfests?  Well, since the very first time we set out on a “hill challenge” (as I’m apt to call it), we generally have had by the far the most participants on the Saturdays when we do these rides (read about the first hill challenge ride).  This Saturday brought in the most riders we’ve had on a Saturday to date, checking in at about 27 riders – actually, if you count the men, I think we may have been closer to 30.

We have been meeting at Nytro now for about a month, and I decided to attempt a pre-ride briefing like the old days.  It is a little harder to talk over the noise of the coast highway than the quieter spots we used to start at – perhaps I should get a megaphone. 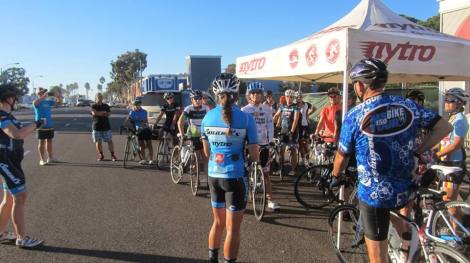 The three groups followed a very similar route up the coast, then through the rolling, and sometimes not so rolling, hills of Carlsbad, San Marcos and Encinitas.  We rolled for about 7 miles or so north on the coast highway and then all groups turned inland on Cannon.  At this point, I turned to my group and said, “I have lulled you into a sense of complacency.  Soon the fun begins!”  (A little ominous, I know). 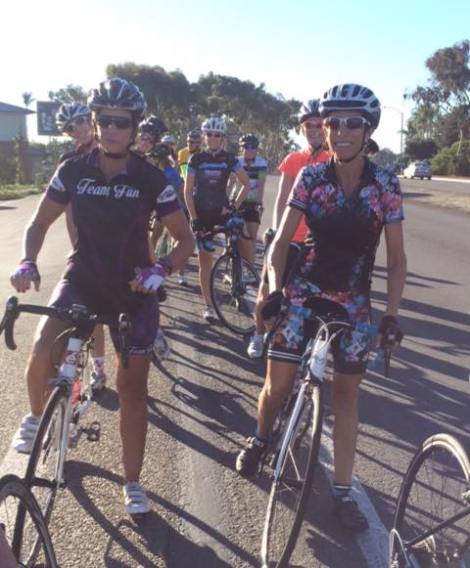 B group on the coast highway

The First Challenge (A Group only) – Hemingway

At an average grade of 10% for 0.6 miles, Hemingway is definitely a fantastic way to kick start a hill challenge.  I mean, literally, you feel like you’ve been kicked in the you-know-where.  Not far into the hill, the road surface becomes concrete.  Word to the wise:  if a road is made of concrete and you are on an incline, that’s usually a bad sign.  That means it is super steep.  After you get to the end of the first slab of concrete and maybe harbor some hopes that the worst is behind you, not long after that yet another slab of concrete begins.  I have done this hill many times, but it had been awhile, and I had forgotten the second slab.  I don’t think I’ll forget it again. 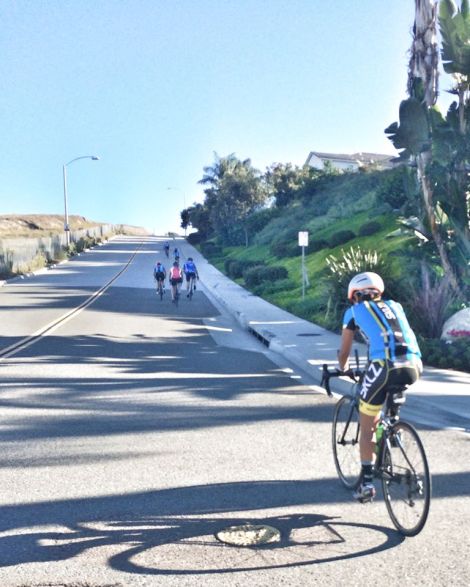 A group heading up Hemingway 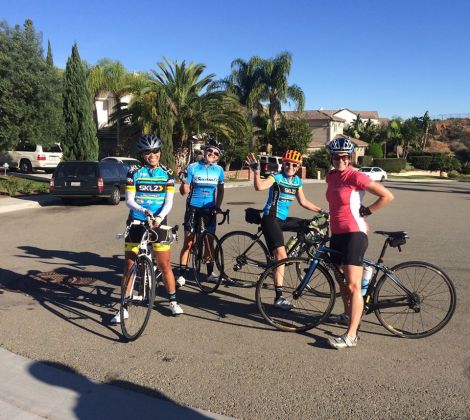 We all tried to pretend to look like THAT didn’t just happen (Hemingway, that is). Janice, Heather B, Heather K, Vivienne.

The Next Challenge:  Faraday (All groups)

It struck me as we headed inland on Cannon that I conveniently forget all the hills in between “the big ones”.  I noted that it was almost a constant climb from the coast to the top of Faraday (with one steep downhill portion).  At this point, all groups were certainly warmed up.

All three groups worked their way south and east on the road-with-three-names:  starting out as College, the road changes to Aviara then Alga, but never really gets any easier.  The A and C groups overlapped on this stretch, and Michell happened to snap some great shots of the larger group just after Poinsettia.

“El Fuerte Flipside” – or Alicante, which turns into El Fuerte

One of my least favorite climbs around is the hill you access by taking a right turn onto Alicante off Alga Road just where it starts to get steep.  You continue flat and downhill, only to come upon a vista that could definitely put fear into the hearts of even a seasoned cyclist.  You can see this hill driving east on La Costa, and I’m not sure how many times my husband has asked me, “What is that hill?”  And I say, “That’s El Fuerte Flipside” (its Strava segment name), and he’ll say something like, “That really is awful, isn’t it…”

There are several portions of this hill that are >10%, with some closer to 15%.  It is long, seemingly endless.  You might ask why I would put my least favorite climb on the route, and I can say I don’t have a great answer except I know it’s about as challenging as it gets in Carlsbad.  I left both this one and Hemingway off the last sufferfest at the last minute because it was excessively hot that day… last Saturday it was merely hot, not excessively so, so we decided to go for it.

There are no pictures from this portion of the ride, and there is a good reason for that.  We were all just surviving.

I should mention that the Alga Road climb taken on by the B and C groups is also very challenging, especially in the first third, which is quite steep.  Both roads get you to the same place, so if one is bad, the other is most likely not too pretty either.

Next up for the A and B groups was to head to San Elijo.  The Double Peak climb was optional, and with the heat building, some took the option to skip it for the day.  One member of the B group and most of the A group took on the challenge, made just slightly more challenging by heading up the Wild Canyon route to hit Double Peak Road at the start of its worst point.  There are at least three bonuses to ascending Double Peak on a hot, sunny day:

(3) Sense of accomplishment (although you can get that on any type of weather day, I guess)

Heather B, Melina and Janice with Double Peak view 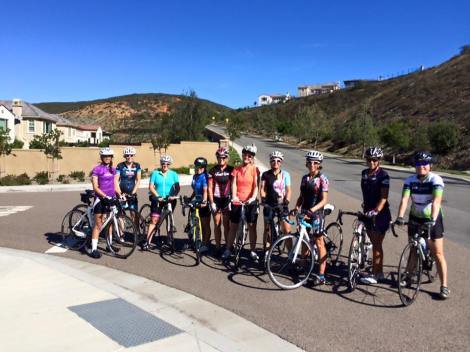 It’s all downhill on the way back, right?

I might have heard that as we began to descend Double Peak and then San Elijo road.  I might have said, “You know me better than that!”  But actually, I didn’t say that.  I was afraid there might be a mutiny, so I sort of left the ending as a surprise.  Needless to say, it was in fact not all downhill on the way back.  It may have seemed like I found every hill I possibly could on the way back (not quite, have to leave something for next time).  I think Vivienne’s expression in the following photo describes how many of the participants felt at the end of the ride:

I brought along my husband, David, for this ride, and while he’s essentially unstoppable when it comes to hills, even he said, “Am I allowed to hate you as much as everyone else must surely be right now?”

I won’t try to claim some sort of platitude like, “What doesn’t kill you makes you stronger”, but I can say that I attempted to soften the blow of the ride with an afternoon of wine tasting.  About half the group headed over to the La Costa Wine Company after the ride to enjoy six wines, hard cider, and a selection of cheese, fruit and nuts.   Although I could’ve used a few more glasses (or liters) of water following that ride before drinking wine, it was to me the perfect way to end an enjoyable morning on the road.  We will have to do that again some time! 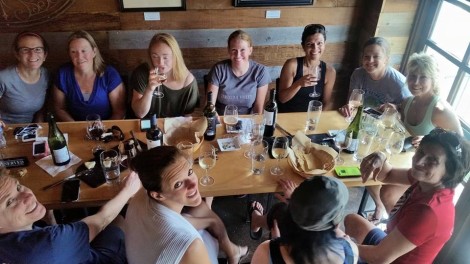 And a few more pictures from the road….

One response to “Who Doesn’t Love a Classic Sufferfest, or at least, one that’s followed by a wine tasting”