I think we had the much anticipated El Nino for maybe one week so far, and a few truly frigid days for San Diego sprinkled here and there.  Starting around the beginning of February, summer re-appeared, the sunscreen is now applied, and the heat is on.  We have had nothing but great vibes on our Saturday rides, with large groups gathering at Nytro for both the standard route (2/6) and the exploration route (2/13).

We were a little short on leaders that Saturday, so I decided to lead the A/B group as a combined group, with Michell performing sweeper duties.  She is the very best sweeper one could hope for – attentively encouraging those near the back, along with snapping amazing photos along the way.  Most of the group typically joins the B group, and I hadn’t had much of a chance to get to know them even though many have been coming each week.  What a strong group, and extremely consistent!  We had a fantastic ride that day, with minimal wait times, some fast pushes, and an overall positive attitude that made me proud to be a leader in this team! 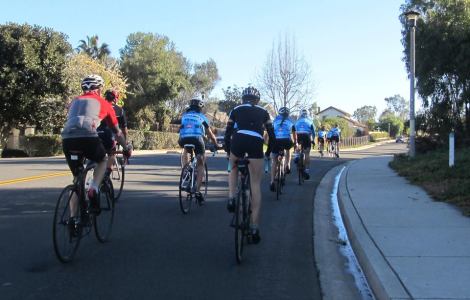 Heading up Anillo Way at the start of the climbing 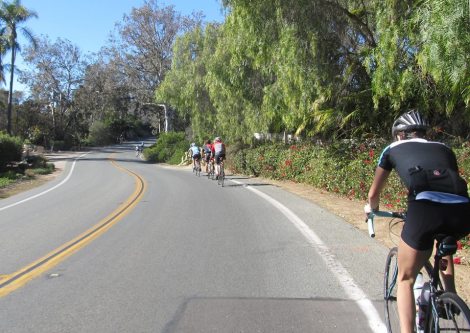 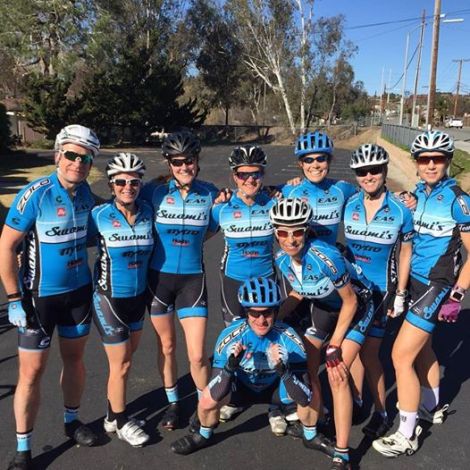 Mark, Debra, Kate, Heather B, Doris, Jen, Kimberly, with Stan and Tatiana in the front – at the midway point

We had probably the biggest group yet this past Saturday morning for our second Saturday of the month “exploration ride”.  Most of use do not love the routine of doing the same route each Saturday, and some of our riders only get the chance to ride on the weekends and are looking forward to variety.  Since many of the group recently decided to train up for the San Diego Century, I figured it would be a great idea to throw the Three Witches climb into the mix.

Janice was in charge of the A group for the day, while Lauren and I had the B group, and Jen led the C group.  All three groups took on the Three Witches climb, and all returned via the 56 bike path.  The A and B group had a little extra distance thrown in through the 4S ranch area.

This route began a little on the harsh side, with the climb up Lomas Santa Fe on fresh yet perhaps cold legs just a few miles south of Nytro.  Our group took it nice and easy, and we were helped in the process by catching several red lights along the way.  Right about when we entered Rancho Santa Fe proper, we diverged onto a little by-way that is sometimes called “Enchanted Forest” due to the abundance of trees (great in the summer for shade).  This route dumps you out right near the start of the Three Witches climb (San Dieguito Road) in Fairbanks Ranch.  We stopped at the produce stand on Calzada del Bosque to check out Lauren’s wheel that was making a knocking sound, and I pretended like I knew what I was doing.  I think we ended up getting it to be a little quieter at least, and I made sure everyone had undressed enough and snacked up for the climbs ahead.

Three witches is a pretty mild climb, when it comes down to it.  Sure, it’s long but it’s never impossible.  My group kept a steady pace the whole way through, and we ended up catching sight of the A group for the first time of the ride. 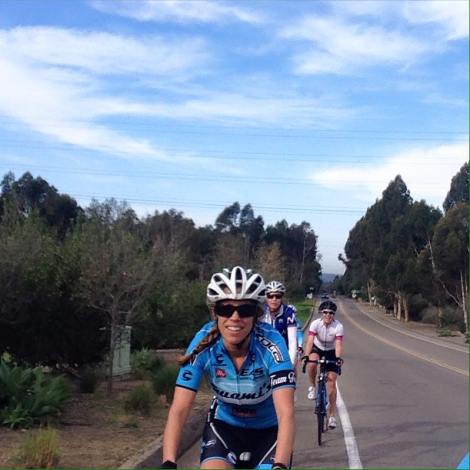 Lauren, Kari, and Carolyn – that might be Debra in the back that I can’t quite see.  I’m not the best photographer while riding, but Jill was in the A group and Michell was not present – so I had to do my best.

We made a left on Camino Del Sur, then would around through 4S Ranch and the area I generally refer to as “Carmel Valley”, but I’m not sure that’s the right term.  There are a few surprising hills in there, and we ended up climbing somewhere in there with Jill, Linda and maybe a few others of the A group.  We jumped onto the 56 bike path at Black Mountain Road, where we met up with the whole A group and rode together to the banana/water stop at Camino Del Sur. 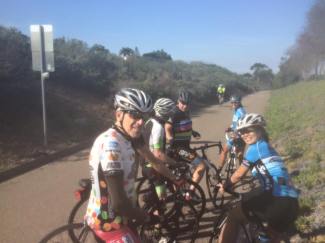 Now I will be the first to admit that I am not the best when it comes to remembering to eat on rides, and so when others were stopping for bananas, I was ready to push on down the straightaway of the bike path toward our next hill challenge.  My charges in the B group concurred, so against all of our better judgment, we skipped snack time.  We did have an amazing ride down the 56 bike path, though – so fun.

Next up was the “surprise” Carmel Country Road climb, which I hinted to earlier in the ride when I said, “That’s not the last hard climb, and probably not even the hardest, I’m not going to lie.”  I noticed a few of my group were picking up speed toward the climb, and I warned, “It’s about to get steep soon.”  It’s sort of surprising, as you don’t really expect something like that off the bike trail, but I’m pretty good at finding “the worst possible ways” (as my son claims).  At the end of this road, you make a right and then fly downill, almost back to the bike trail, but then make a left onto Carmel Mountain Road, down to Sorrento Valley Road, and then right onto the little pedestrian path back to Carmel Valley Road that helps you bypass the insane I-5 on-ramps.  There was a helicopter flying strangely low and close to us on the pedestrian path – I was almost sure it was going to land somewhere near there, but ended up flying off.  Never found out what that was about!  I did lie in wait for a few pictures here to make sure I didn’t end up totally empty handed. 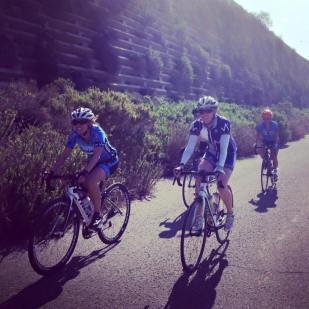 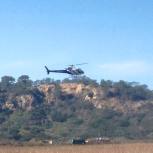 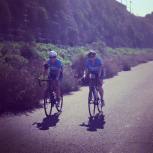 The ride finishes with a cruise up the coast, where we met up with the C group that had finished their route somewhat earlier. 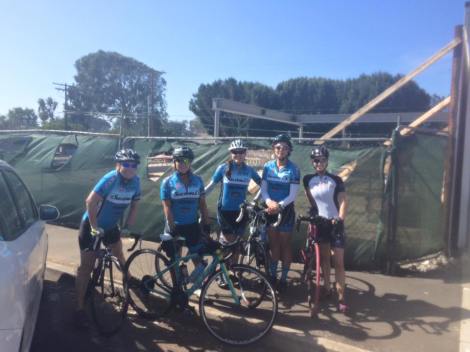 This Saturday (2/20) we will be enjoying the classic Swami’s route (A and B groups) with a little twist in Rancho Santa Fe, while the C group will enjoy a coastal ride.  Make sure to join us at the Pizza Port in Solana Beach around 11:00am for our Social Hour.  I would say that we will plan on doing this once a month, but for now I’ll commit to a “periodic basis”.  You can join us whether you decide to ride or not.

Our Meetup has the latest events:  http://www.meetup.com/Swamis-Team-Fun/