Swami’s Team Fun was out in full force this last Saturday for a crowd-pleasing favorite ride that takes us south to Torrey Pines, around La Jolla Cove for the requisite photo shoot (and nose plug, since the smell is typically overwhelming), and then down through Bird Rock and Pacific Beach before returning north on the coast through UCSD.

This week I estimate during the course of the ride, we had about 40 participants.  We broke into two groups, one nearly unmanageable group of 30+ riders and then about 8 riders in the C group, led by everyone’s favorite leader, Julie (although, really, it’s hard to pick a favorite among our great leaders!).

I say unmanageable mostly because I wasn’t totally on my game in terms of ride leadership.  I will admit that it’s my biggest group to date, and I was relying on the other leaders sprinkled through the group to let me know if anyone fell behind.  I’ll also note that although this doesn’t totally excuse me, I was in the throws of an ear infection that morning (unbeknownst to me, as I had never experienced such a thing!).

Our first and main challenge was the Torrey Pines climb.  A true challenge for some, a breeze for others, the vast majority of the group regrouped at Torrey Pines, while Julie formed a C group to split the group into somewhat more reasonable sizes.  We seemed to pick up riders as we went, and so the A/B group was so huge at our La Jolla Cove photo shoot, a good 10+ riders decided not to try to squeeze into the photo. 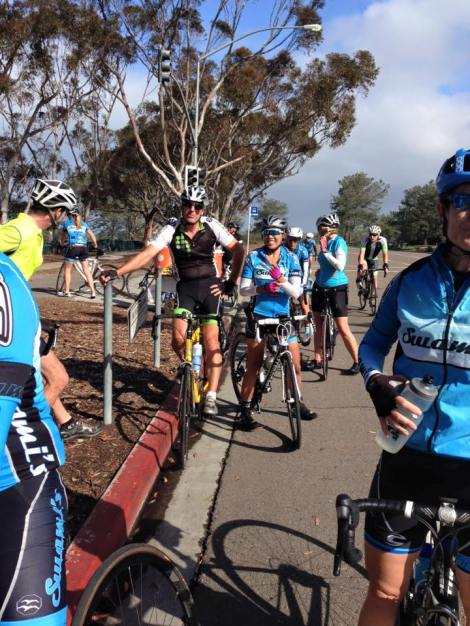 Doris at right, Janice in the center of the photo as the rest of the group roled up the hill and some took advantage of Anywhere Bicycle Repair’s banana and water stand. 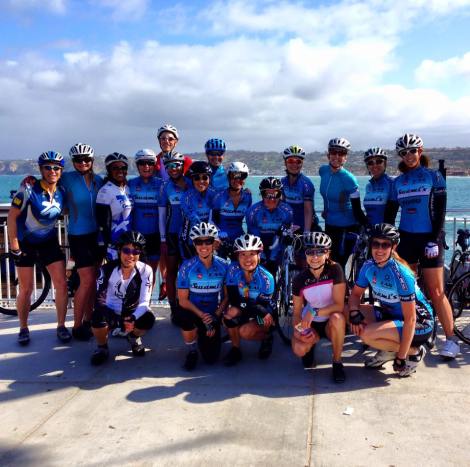 I’m going to attempt to fill in some of the names here, but I will need some help getting a 100% (I’ll blame it on the ear infection again.  Back row:  Toni, Kim, Gina, Linda, (don’t know), Janice, Soo, Doris, Melina, Heather B, Brielle, Manda, Sue, Dena. Front row:  (need assistance), Lauren, Carol, (need assistance), Kate. If I didn’t catch your name, make sure you say hello to me next time (I’m Heather B bending over in the middle) 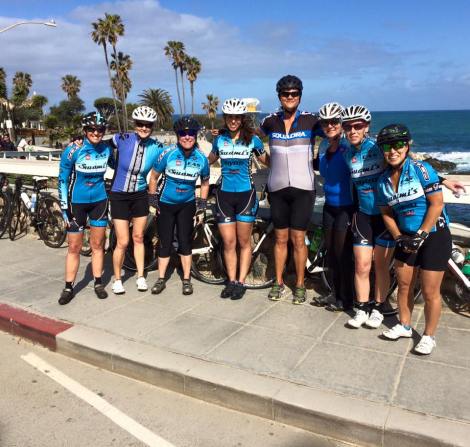 It’s kind of funny we chose the exact same spot.

I love the part that winds along the coast and down through Bird Rock.  I never know the exact turns, and I always go by following the Bike Route signs.  I will fess up and admit I missed the best way to turn out of Bird Rock and into the heart of PB, but I made up for it by managing to eventually get back on track (Cass Street south).  Due to the turns and stops, you are kind of forced to keep much of this ride at a very reasonable pace, and we certainly did.  It felt very cool to be part of such a huge group cruising around downtown! 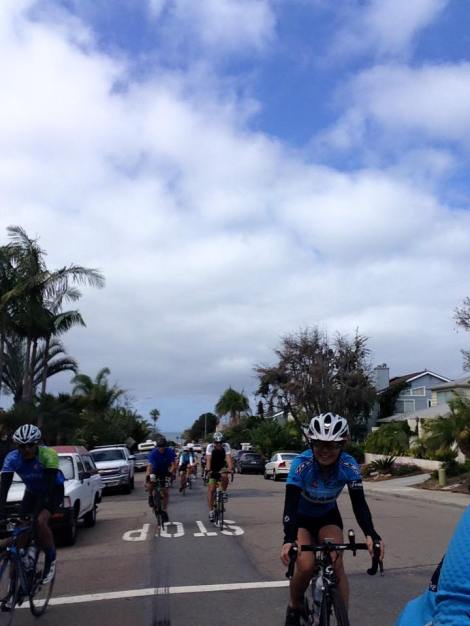 Carol (at right) and Herb (at left), with the rest of the crew behind. Herb helped me get back on track.

The C group actually took a slightly longer route and went all the way down to the Mission Bay Bike Path, which adds a few miles. 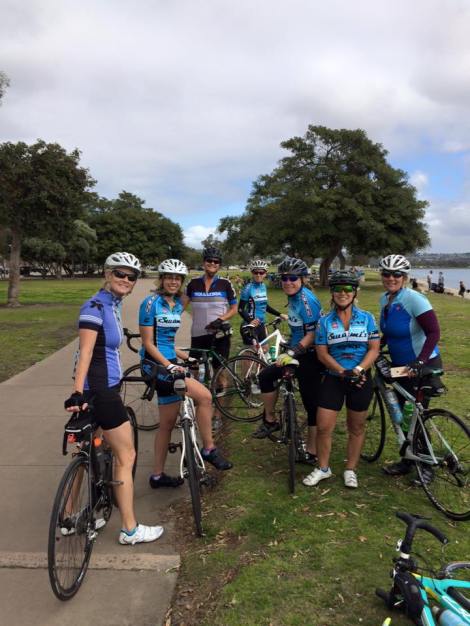 Navigating the Rose Creek Bike Path isn’t a favorite, alas, but it’s kind of a necessary evil with large groups.  The alternative is risking some narrow lanes and merging I-5 traffic on Mission Bay Blvd, and any time I’ve been in a group there, it’s been trouble.  After the Rose Creek Bike Path, you make your way over to Santa Fe Drive and then onto the Rose Canyon Bike Path, which drops you at the south end of Gilman Drive.  Gilman Drive takes you into the heart of UCSD, and also offers the next-to-last challenge of the ride.

Most of the remainder of the ride is pretty relaxed, with the exception of the last kicker into Del Mar.  I am sorry to say our group that stayed together for that whole time got a bit broken up at this point, and we finished in smaller groups up the coast, with many riders heading off to their homes from the coast.  We don’t usually totally break up like that, so I apologize if anyone felt left behind.

Several of us enjoyed some social time at Lumberyard Tavern across the street following the ride.  We will make sure to schedule official (and unofficial) post-ride social time at least once a month.

This week we are doing a loop we last did around Christmas time that takes us into Rancho Santa Fe, then north through Carlsbad along some quieter roads and then back along the coast.  The C group will be sticking to the coast, for a 25+ mile ride to Oceanside (with some possible extra miles on the bike path).

Get ready for the big hill challenge on 3/26 where we take on Mt. Soledad!! 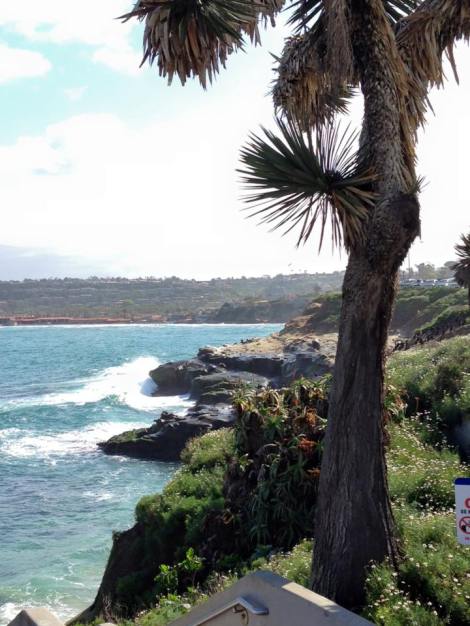