The second Saturday ride of each month is an opportunity for our route masters to come up with a unique route where at least some part is new to everyone, with the goal of balancing the creativity with a healthy dash of simplicity.  We will freely admit that sometimes our routes aren’t the easiest to follow.  We decided to start and end at Karl Strauss Brewery in Carlsbad last weekend to make it easier for everyone to attend the skills clinic.  The different starting location made it a little bit easier to mix up the route.  I chose a few less busy arterial roads through Vista and Oceanside this week, and although I didn’t intend it to be a hill challenge, many people were questioning the total elevation gain at the end.  I swear it was only 2400′!

We started the ride with our now standard safety briefing, where I highlight a few items to keep in mind for the safety of yourself and others. 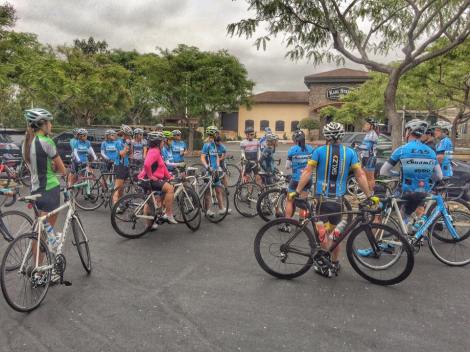 There was a little discussion of the group not loving the new group letter designations of C, D, and E – maybe we’d be better off with X, Y, and Z.  “Group X” sounds very mysterious… I kind of like the sound of that.  The problem with the double use of the A/B notation is that we’ve had more than a few new folks leave Nytro with the Swami’s B group, and realize too late that it wasn’t what they were looking for (especially when the speed skyrocketed not long into the ride).  We prefer not to strand people like that, so we’ll have to stick to the C, D, E notation in print. 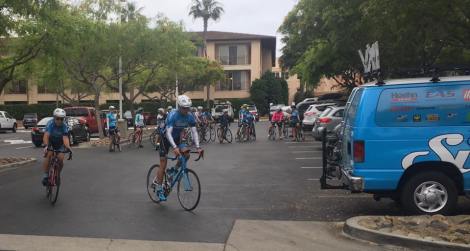 Fred and Mark head out on the C ride

The route for the C and D groups headed inland for the first challenge on College Boulevard, always a toughie due to its length and insistence on continuing to climb when you thought it should be done.  Next the route swung further east on Lake Boulevard, with a bypass through Shadowridge, and then my third favorite part of the ride – the little winding way through those remote streets next to 78 that you may have ever known were there.  It’s a great way to bypass exit/entrance ramps for 78 (remember Smilax!). 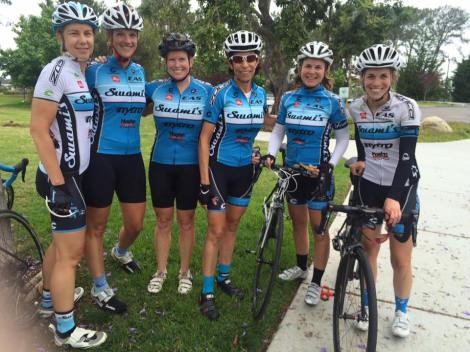 We eventually went onto part of the classic Swami’s “Vista Twist” route, but opted to start angling toward the coast instead of continuing on into Bonsall.  My second favorite part of the route is Osborne Street – although it is potholed and narrow, I love the speed, and I love the little punchy hills in the second half.

Finally we got to my very favorite part of this route – the bear sculpture in Buddy Todd Park.  Sure, you have to suffer through all the hills on Mesa to get there, but it’s the perfect photo opportunity!!

C group poses at the bear

D group posing at the bear

Debra poses at the bear

The E group kept the route simpler and less hilly by turning onto Melrose not long from the start and heading over to the 76 bike trail (a route very similar to the Swami’s Monthly Social Ride).  They overcame a couple of flats, but banded together and got back on their way to the skills clinic. 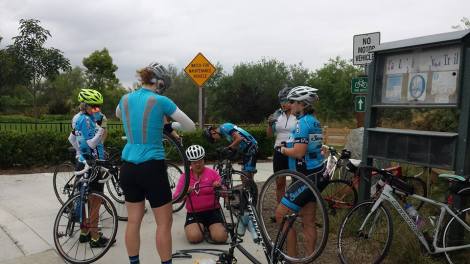 The Skills Clinic hosted by Chris Daggs and Michael Burditt was a huge hit, with over 40 people in attendance (many of them from our groups!).  It was time well spent, and many of us followed the clinic with a beer at Karl Strauss on Swami’s.  Look for more of these in the future!

For reference, here are the routes we took last Saturday, and then a few more shots from the road. 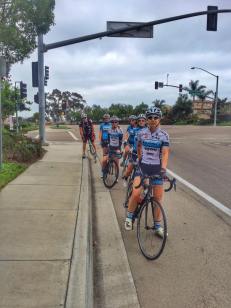 And finally, an awesome group shot!