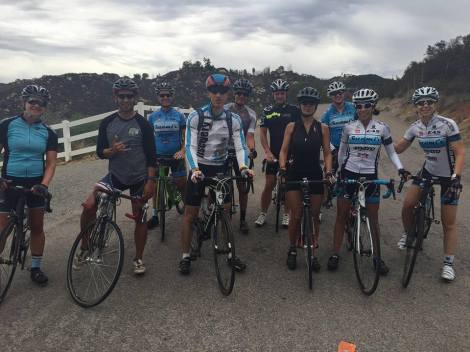 For the last Swamdo training ride, I decided to embark on a trip to De Luz, a hidden gem located north of Fallbrook.  It’s not so much that it’s hidden as much as it’s a fairly far ride from our typical departure spots in North County, therefore, it remains hidden to many a local rider.  It’s also deceptively challenging, but more on that later.

We left the Iron Fist Brewing company parking lot early last Sunday morning with 16 riders, most of whom did not know each other or had ridden infrequently together.  The sky seemed a little more on the threatening side than typical, and there was the smell of rain in the air.  An early flat prompted a couple of folks with tight schedules to bolt early.  This was not exactly the recipe for the perfect ride.

After the flat repair, we started rolling fairly consistently and started to find our legs on a solid climb up Olive Hill Road.  We continued cruising mostly in the upwards direction toward Fallbrook proper, where we stopped and considered the potential folly of entering De Luz with what appeared to be thunderheads gathering and certain rain.  Three more riders who couldn’t put the time in for the long haul turned around at this point, and then there were 11.  Everyone except perhaps me seemed fairly determined to continue on to De Luz, like it wasn’t even a question.  I detest riding in the rain, but it seemed like we were meant to go on.

I decided to design the route around De Luz in the clockwise fashion.  The only other time I had ridden to De Luz, I rode the same basic loop but in the counterclockwise fashion.  If any of you have ever climbed Sandia Creek, you know why I opted out of that direction.  I warned everyone we were about to embark on a seriously long climb, but I said, “It’s not that steep”.  I thought it was about 3 miles long and maybe in the 4-8% range.  It was certainly not that long, but closer to the 7-10% range.  I also gave the impression this was the only major climb on the loop.  I’m not sure where I got that impression. 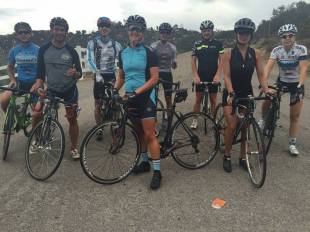 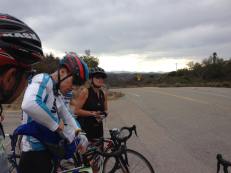 The loop consisting of the main roads through De Luz (De Luz Road – Carancho – Sandia Creek) is approximately 23 miles long.  There is absolutely nothing out there for support, no stores and you can barely spot a house among the hills and forests.  We experienced very low car traffic that day, and a lot of silence – outside of the sound of light rain drops falling and our gasps for air as we climbed pitch after pitch.  For the most part, you are either descending something exhilarating or terrifying (depending on your viewpoint on fast, twisty descents), or starting a climb that looks like it’s going to get ugly fast (>10% anyone?).

As a group leader, you would think I would’ve learned that one should never promise such things as, “There aren’t any more steep climbs”, or “This is the last one”, or anything to that effect.  Because there is always, in fact, one more hill you didn’t remember and it will certainly be worse than you were hoping.  The back side of Sandia Creek definitely fell into this category.  While being completely preoccupied with the harrowing descent I knew was coming, I failed to recall that the southerly direction had its own fair share of >15% grades.  At that point in the ride, though, pretty much everyone was expecting something fairly gnarly around every bend – and yet somehow, we loved it.

The rain and low hanging gray skies did not make for great photo opportunities, but I’m fairly certain photos would fail to capture the magic of a perfect ride in De Luz anyway.  Sure you might smell your brakes on some of the descents, you might curse your existence on a few of the climbs, but you feel like it was a ride well ridden as you climb your way out of De Luz and back into Fallbrook for what you definitely hope is a mostly downhill return home.  Your mind is full of overhanging trees, fruit-laden hillsides, and strangely, a sense of peace (that is if your ride leader doesn’t first take a wrong turn and take you up a “bonus” hill before realizing this was definitely not the right direction).

Of course it wasn’t mostly downhill, and of course, it never is.  The rain kept coming and going, but was never too onerous.  We all seemed to click a little bit into auto-pilot, especially when we returned to the familiar ground of Melrose Drive, heading south toward Iron Fist.  Some started to talk and/or dream of the food offerings, and a few people asked me how much distance was left.  Are we there yet??

We rolled into Iron Fist, and several in the group had to head straight home with time encroaching on the middle hours of the afternoon.  I was absolutely starving, and there would be no heading home until my belly was satisfied.  I ordered the largest plate offered by Grillfellas – a nice woman had suggested that the 1 slider size was a perfect size, but I decided that this was certainly a 2 slider day.  Caution and moderation be damned.  If she had seen me devour the bag of chips at our second stop, she would know that I was on the wrong side of hangry.  There were six of us that hung around for food and drinks at Iron Fist, where I enjoyed what I think is called their Oktoberfist beer – a limited edition beer that was put on tap a few weeks ago.  I can’t sit here and say I am the biggest beer aficionado as I’m more of a wine person, but if I’m going to drink beer, Iron Fist is my solid local favorite.  I even managed to finish my own pint that day (usually I’m looking for my husband to help finish it off).

Hats off to the three ladies that joined the group for the full adventure:  Lupita, Kimberly and Tatiana.  At 72 miles and 6300′ elevation, that ride is not for the weak.  A special shout out also goes out to Steve Ummel, who ably performed sweeper duties for the day.  I also want to thank the other riders who joined me, helping to make it one of the more memorable rides of the last year.  It’s hard to pinpoint what exactly makes a ride click, but that one certainly did.

What a great close to what was starting to seem like a very long Swamdo training season.  We had a bonus 6 weeks in there due to moving the ride itself, but in that six weeks’ time we have had at least a half dozen or more riders new to both Swami’s and the Sunday group join the ride.

We are now looking forward to next Sunday, November 6, with great anticipation – the Swamdo ride is finally here!  Join us for a 42, 72, or 98 mile ride sure to please the eyes and challenge the legs.  De Luz isn’t on the routes, but we are heading in that direction and will enjoy the picturesque northeastern corners of our county, ranging through Bonsall, Fallbrook, Rainbow, Lilac, and Valley Center.  The century ride finishes along the coast and through Carlsbad.  The ride is followed with a celebration containing catered food and Iron Fist beer at Alga Norte Park.