Some rides are 103 miles, and some rides are 4 miles.  Two Wednesdays ago Jill and I joined the City of Carlsbad’s Walk + Bike Program Farmer’s Market Ride.  I met Chelsea, the organizer, through a Meetup message she sent me about our team’s potential involvement in a bike expo she was putting on a few months back.  The goal of this program, from what I understand, is to promote the use of the city’s wonderful bike paths and trails, and at the same time, look for ways they can be improved.  All levels of folks on all kinds of bikes are invited to these events.  I decided since I was free, it would be fun to do some community outreach to a part of the local cycling community we do not interact with much.  Jill was free also and is generally up for almost anything, so we rode over to the event from her house.

The ride gathered at the farmer’s market, and since we showed up on time, we in fact had about a half hour before the ride started to walk around and enjoy the samples the market had to offer.  We also earned $1 off coupons for biking to the event, and free farmer’s market reusable grocery bags.  I particularly enjoyed sampling the cheesecake-in-a-cup stand, but purchased soundly healthy items such as blood oranges, strawberries, and zucchini (at least, that’s the story, and I had Jill snap at least one photo to prove it). 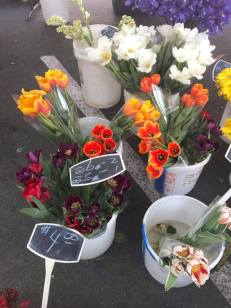 We returned to the meeting spot to begin the ride, and well, I think perhaps Jill and I in our “fancy clothes” were maybe a little tiny bit intimidating to some of the group, at least, the ones that weren’t too busy trying to get their little ones to keep their helmets on.  We were asked more than once if we would be able to ride slow enough on our bikes for the ride.  Apparently there was some serious concern that our bikes could only go fast, or that if we tried to go slower, we might fall over – you know, because our feet were clipped in.  We answered a lot of questions, and while I never really consider myself an “expert” or “serious” cyclist (I leave that to the pros), we were the local experts for the day.  I even put a chain back on for a woman who dropped it immediately upon setting off.  Thankfully no one had a flat and had to witness my sketchy flat-changing skills – I’d be exposed for the charlatan I am at that point.

Highlights of the ride included the little tiny guy on his push bike, the kids in the watermelon helmets with streamers, and just getting to talk to people I don’t usually encounter.  I even discovered there were at least a few of the riders familiar with our group and who had been checking out our coffee ride wondering if it was something they could join.

We meandered around some Carlsbad Village streets neither Jill nor I had been on (quite a feat for us), and stopped for the required group photo shown above at Holiday Park.

People have a lot of preconceived notions about road cyclists in general, and Swami’s in particular.  Elitist and super fast are two words that come to mind, and while some of us were afraid to originally don the blue because we didn’t feel like we were worthy, we are slowly changing that mind set.  “Fast” is relative, as was driven home that night, as is “expert”.  The attitude of our particular flavor of Swami’s, Team Fun, is to spread the love of cycling and the joy we receive from it to others – expanding Swami’s group ride offerings, mentoring newer riders, learning and getting stronger and faster together.

Consider joining these types of community events in your area when you can.  You’ll never know who you impact.  The next one for Carlsbad is Saturday, April 29 at Stagecoach Park.  The ride leaves at 11 am, so perfect timing for after the Saturday ride.