“Maybe you shouldn’t have named the ride ‘Suffer Fest’,” someone offered to me last Saturday morning when we were splitting into our group levels. “Perhaps that scared a few people away.” I’m a big believer in “truth in advertising”, and last Saturday’s ride was no joke and I wasn’t about to mislead anyone.  I did a very similar ride once before, back in July of last year (it was actually worse), and I don’t believe I’ve seen the vast majority of those ladies since then.  One might think that would make me cease and desist on designing these routes of torture, but on the other hand, I can tell you that in this case, truly, what doesn’t kill you makes you stronger.  Every once in a while, you have to push the boundaries of your comfort zone.  For each of our three groups, I think almost everyone got to feel just a little bit uncomfortable!  It was a successful day. 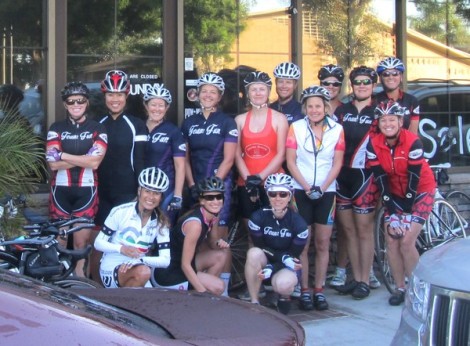 Look at those smiling faces, free from grime and crusted salty sweat!

Saturday was on tap to be a scorcher, but temperatures were pleasant as we ambled down the coast toward our first turn inland.  I hope you all enjoyed that five miles of flat.  That would be about all they would see until they returned to the coast.  This is one of those rides where it’s better to turn your Garmin to the “elevation gain” view than the “miles per hour”.  Base climbing is not about speed – it’s about getting it done! All of the groups headed out Poinsettia Avenue toward San Elijo, with the Advanced group having the added bonus of the “El Fuerte” climb to Alga thrown in there to get the old legs warmed up.  What’s a little 3/4 mile, 9% grade at mile 10?  Compared to what was to come, it’s like that hill wasn’t even there.  I was just wanting to make sure we tested out the old tickers before we got on something a little longer and more intense.  There were maybe a few eye rolls as we regrouped on Alga, I’m not sure.  It’s best on these types of rides that I look away and let my team mates express their feelings about me in private. We re-joined the basic route out to San Elijo, and proceeded into the town proper, only to head out on Elfin Forest for our first grand climb of the day – Via Ambiente.  I am a little obsessed with this climb right now.  I love its mixture of pitches (from so steep you’re not sure you can go on, to even a little downhill section), I love its seclusion (you rarely see a car), and I love the views.  It’s hardly truly “epic” in that it’s only about 2 1/4 miles long, but we take what we can get close to the coast.

One of the views from the top of Via Ambiente

As we approached the turn, my heart sank a bit – the gate was, for the first time ever, closed.  I wasn’t 100% certain if my crew was the strict law-abiding type or not, so I said tentatively, “Should we go around the side, or do you guys want to skip it?”  Jill tried to offer that we could climb Questhaven dirt instead, but I pretended I didn’t hear her.  Everyone was game for heading around the gate, and we pretty easily convinced ourselves we didn’t see any “No Trespassing” signs… on the gate.  So we proceeded, figuring if anyone really wanted to rob us of our pain, we could turn around at any time and feign ignorance.  A truly car free climb on a glorious sunny morning – cycling heaven, no doubt.

Jill and Judy smile as they reach the top of Via Ambiente.

Judy, Tammy, Keely, Candace and Heather enjoy a snack after the first 20 miles and ~2000 ft. 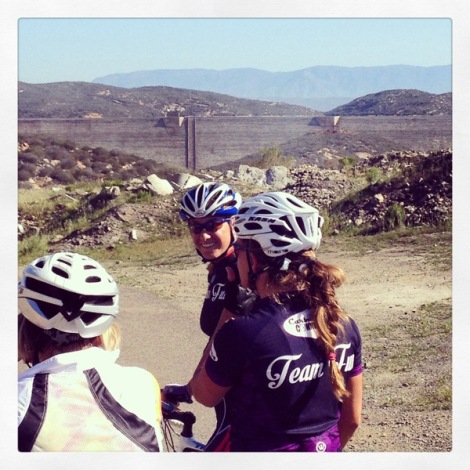 After some snacks, it was time to descend that beast and continue out on Elfin Forest Road toward Escondido.  We were definitely enjoying our relaxing pace when all of a sudden, there was a loud pop and I knew someone’s tire was going to be in bad shape.  There’s the more gentle hiss of a mild flat, and then there’s the almost gun-shot level noise when the rubber really takes a gash.  Tammy experienced the latter case, unfortunately.  The six of us pulled over to the side of the road, and there was a bit of an awkward silence as we all kind of looked to the others to take the lead.  Sure, we had a stray cyclist or two ask if we needed help, but while we were too proud to invite a stranger to do our dirty work, none of us really jumped to the task.  I looked at Jill with the thought of, “Where is Heather Krauss when you need her??” 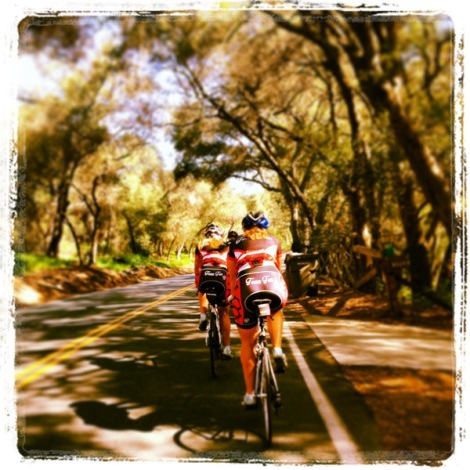 I decided it was high time I get better at this whole process, so I dug in, found the slash, and went to getting the tire off.  Compared to my icky set up where it’s nearly impossible to do anything with the tire, this seemed a whole lot more reasonable.  It tells you something that we didn’t even know if the patches had a sticky side to them, or if you needed to apply glue.  I did know that the patches weren’t really meant for the tire so much as they were for the tube, but I figured it couldn’t hurt to put something over the clean 1/2 inch cut through the rubber.  We used a pump to add a bit of air, futzed with getting the tire back on (Jill threw a dollar bill in there for even more support), and then I proceeded to fail with TWO CO2 canisters.  It wasn’t helping anything that Keely was showing off her shin scar from a CO2 disaster.  Eventually I gave up, and we took turns with the pump until we had a decent pressure.  Turns out we weren’t totally helpless!  While the rest of the climbing was out of the question for Tammy (none of us thought it was safe to descend on that compromised tire), she did in fact make it safely all the way home.  My first real tire change! 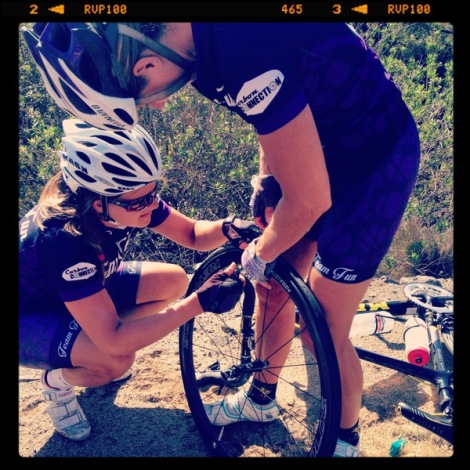 Heather and Tammy ease the tire back on.

We parted ways with Tammy and Jill (who accompanied Tammy, in case of further disaster), and then headed on to the next and last big climb of the day – Twin Oaks to Double Peak.  I asked Candace as we crested Twin Oaks near the fire station, “Do you want to stop and wait for the other two, or just push on and get this thing over with?”  We both voted to push on – we were going to be reaching about 4000 ft or so and 35 miles – it was time for another snack.  Oh yeah, and I had to use the bathroom since about mile 7 – not your usual motivation for climbing Double Peak, but it helped. Climbing Double Peak was especially important to Keely that day, as she is undergoing knee replacement surgery Tuesday of this week (3/18).  She had never yet climbed Double Peak, and wanted to do it before her surgery.  Now that’s dedication!!  I was so glad we were able to help her reach that goal, and of course, get the obligatory “view” picture. 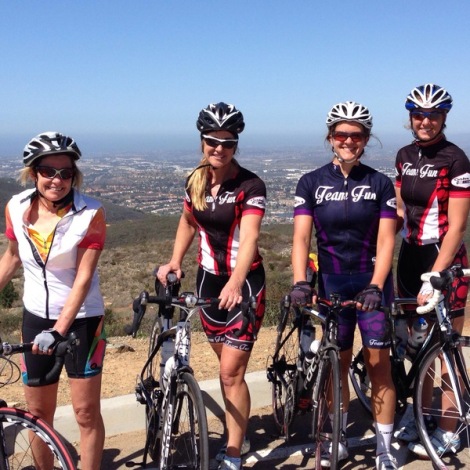 The worst was over, although no doubt the hills of Carlsbad never seem to relent.  We added an additional 1000 ft or so on our return trip.  It was a ride to remember! Several of the riders in the intermediate group also chose to challenge themselves with Double Peak that day, and they had the picture to prove it. 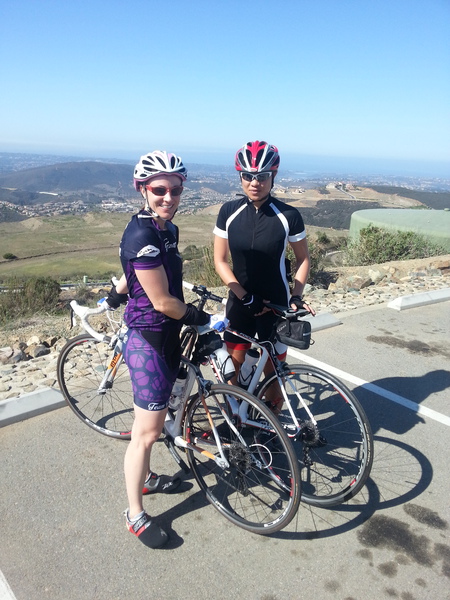 It was a fine day for climbing, and everyone at least did their best to hide their grimaces from the camera.  I know that I, for one, can’t wait for Suffer Fest #2! Here’s another ride report from Michell, who rode a bit with both the intermediate and beginner groups: “I was looking for a least lame excuse to dodge the advanced group ‘sufferfest ride’ when Christa (the beginner group ride leader this week) asked for a volunteer sweeper, so I jumped at the job!  It was quite nice. We went at a really easy-going pace. Alas, as we were supposed to turn inland on Poinsettia a bunch of big delivery trucks shielded Christa from the turn and she kept going south. Yours truly was of no help whatsoever, having gotten myself into an autopilot. Heading south on the Coast Hwy is usually a ‘home stretch’ for me. had Sian not said anything I probably would have taken them all the way down to Del Mar before realizing that we were supposed to have turned inland… like, 10 miles ago.  It was great that we had team leaders to spare for the combined intermediate – beginner group, tho. The group split on the Poinsettia rollers, so Christa & I just bookended three beginners all the way up San Elijo Hills and back. Everybody made it. Sian and Ellie had their personal best time for the climb, I think.  On the way back to the shop we ran into quite a few interesting groups. One was a peloton of fixies that went past us on a climb and made me a bit nervous on the descent (they were real fixies. Not a front brake among them, so they were rear-skidding on the way down in front of us). There was also a motorcycle bunch closer to the coast, and a bunch of costumed folks on the coast. The group was nice and tight all the way into Carlsbad. Alas, we didn’t all get in together because Gwen caught a front flat just a few blocks from the finish and the little wire that caused it refused to come out.  The nice guy in front of whose house we were stopped came out to help and we ended up leaving the wire in (just filed it down and put a piece of electrical tape over before installing new tube). That reminds me to add a pair tweezer to my repair kit.” – Michell And finally, more pictures!

Christa, Ellie and Sian on Poinsettia 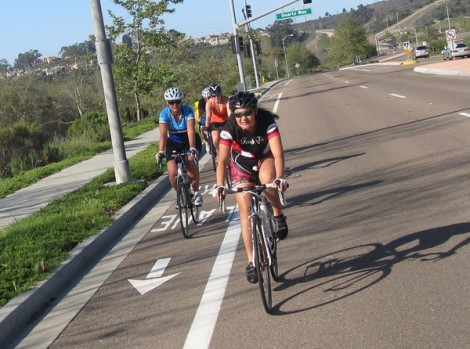 Christa shows her joy at being at the top!

Heading back to the shop after a day well spent. 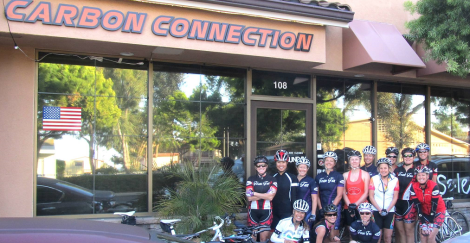