I am pretty much not to be trusted with Google Satellite.  I will start with that, and explain later.

The main goal of this ride was to find the Woreland Castle.  Michell taunted us on our last Wednesday’s Strava post, and noted that we almost saw another one of San Diego’s castles … but not quite.  I did not know there was a castle (at least, a very real replica of a castle turret) anywhere near here.  As I am quite the medieval enthusiast, I decided that we simply had to explore and find this place!  I wasn’t so excited that I didn’t consider backing out in favor of a flatter, more tame ride to the 56 bike trail loop, but Jill was very enthusiastic and insisted we take our field trip.  I can’t really resist Jill’s enthusiasm.  She’s like Tigger.

Isaac Jenkinson Frazee, an artist, poet and writer who specialized in Indian subjects, moved to Valley Center’s Moosa Canyon in 1890 and built what has come to be known as the Castle on Old Castle Road.

Frazee wanted to create a replica of an ancient feudal castle that was the home of his Scottish ancestors. With the help of a Scottish mason, in 1893 he built a turret with three levels and walls three feet thick. The stone tower is said to be patterned after Dunnottar Castle near Aberdeen, Scotland, which dates from the 12th Century. – Valley Center Historical Society website

Instead of our usual start on the west side of San Elijo (putting the ride at a minimum of 50 miles), I decided it was prudent, given the many unknown roads we were taking, to start on the other side of the San Elijo climb.  This turned out to be an excellent choice.

We encountered our first private property signs and locked gate where North Twin Oaks gets bumpy, at the right hand bend near the quarry.  All those times I’ve been on that road wondering where the huge trucks were coming from and I never noticed before there was a quarry at the end of that road.  We have ridden this route so many times at this point, and although this is the first time I encountered that gate locked, we figured we were pretty much regulars – nay, almost residents – at this point.  So of course we did not heed the, “Turn back – locked gate ahead!” signs.  When we reached the crest of this portion of the road, Jill decided we should do something different this time and “descend” Silver Leaf road.  We’d had the (dis)pleasure of traveling the opposite direction on Silver Leaf for the Spy Poker Ride this year, so we were somewhat familiar with the road.  It’s not so much “descending” as it is a lot of steep ramps up and down with a road in questionable condition.  I may or may not have walked down the steepest part of that road. 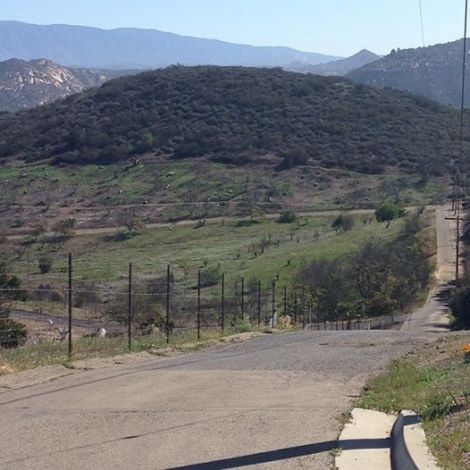 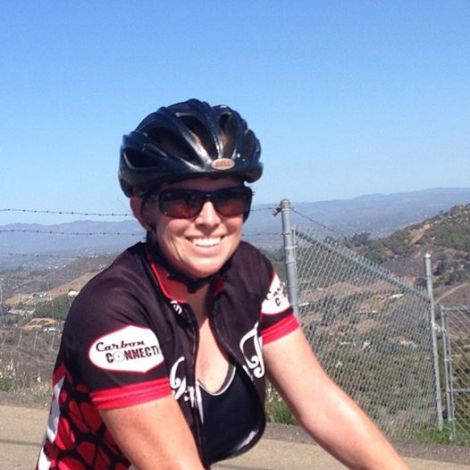 We eventually made our way over to Old Castle Road proper and began the ascent toward Pamoosa Lane, the advertised address of the aforementioned Woreland Castle.  Michell had mentioned she wasn’t sure if you could see it from the road, so since we really wanted to make sure we saw it, we headed out Pamoosa Lane.  It was a rather lovely road.

We kept our eyes out, and had no idea how far back we’d have to go in order to reach our desired destination.  We were somewhat crestfallen when we reached the gates of yet another “private property”, and while the gates were open, this one looked a little odd. 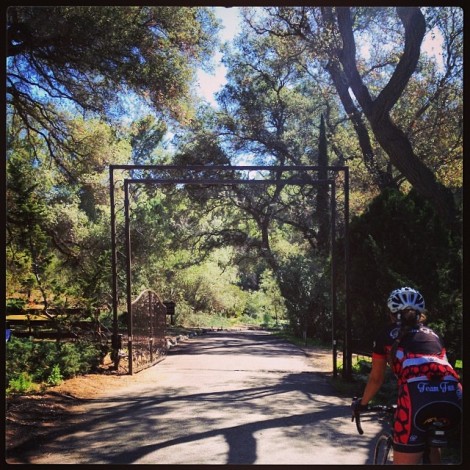 I said, “Do you think we should go in there?”  I don’t usually mind passing around the utility type, generic yellow gate or basic metal brown gate, but when it’s a rather fancy gate with the name of the property on it, I generally stay out.  There was also a very odd looking low hovel made out of what looked like dozens of blankets to the left (we thought, sweat lodge??) and then just inside the property, we found the descriptive sign.

I don’t know, I mean, it seemed harmless enough.  I’d heard of “Essenes” and “Universalists” before – never heard them used together, but figured those with Divine Wisdom surely should know that cycling is awesome, adventure cycling is even better, and a couple of women on bikes are harmless.  So, we continued on.

It certainly had the look of a retreat, or a campground even, with signs pointing things out – almost like it was meant for public access.  So we continued on in the direction of the sign that pointed to “Old Castle Ranch” – up this very narrow windy lane.  At this point, the voice in my head that I think I inherited from my mom said, “This seems like a very bad plan.”  I am fairly used to not listening to that voice.  We continued to where we had two choices – up or down.  Thinking you’d put a castle up high (for defense purposes, obviously), we chose up, only to quickly discover that it led to someone’s house.  I used the trusty Google and found that the sign pointing in the other direction contained the name “Lien”, and that’s the last owner noted on the Valley Center Historical Society website.  It was a road in even worse condition, and lo and behold, there was a guy out and about on the property.  Jill continued over to what looked like a bridge (we could hear water, it was a valley of oaks, and exactly fit the description of the castle setting), when the guy proceeded to fairly aggressively tell Jill over and over again that it was private property.

“Surely you saw the many signs?” he asks.

“We were looking for the castle on the Valley Center website.  I see this doesn’t go anywhere, I’m sorry.  Do you know where the castle is?” Jill asks in her sweetest voice.

“This is private property.  You need to have permission to be out here,” he continues, in his rather mean vein.

“Is there a castle here?”

“No, this is private property and you need to leave.”

It wasn’t exactly easy to get up that hill (we couldn’t even really get into our pedals), and Joe Private Property was getting his keys to hop into his car.  Once we got back out of the hollow and started back on the “main” road out, I spotted the crenelated tower.  Success!  I quickly snapped a couple of pictures and we went on to see if we could get a better view.

Just as we were slowing down to turn back, as we realized we weren’t going to get a view too much better than a spot a little down from where I first stopped, Joe Private Property came up behind us in his car.  I waved for him to go by us, as I knew the road fit one car only and I needed to descend slowly due to the road conditions.  He insisted we go in front of him.  We made our way out with our escort, and headed onwards and upwards on Old Castle Road, away from the agitated fellow.  He apparently drove down expressly to escort us out, as he never passed us afterwards.  I’ve said this before, but I must look very sketchy.  One wonders what he is doing out there that makes him so nervous about visitors.  As we continued our ascent on Old Castle, Jill and I made up some stories for possibilities.

So, Michell, it turns out you actually CAN see the castle from Old Castle road!!  It’s probably not the safest place to stop for pictures (it seems to be a much busier road than I remembered), but it’s probably safer than encountering Joe Private Property.  I would suggest to anyone who fancies this type of ride to NOT proceed past the Old Caste Ranch gates!! 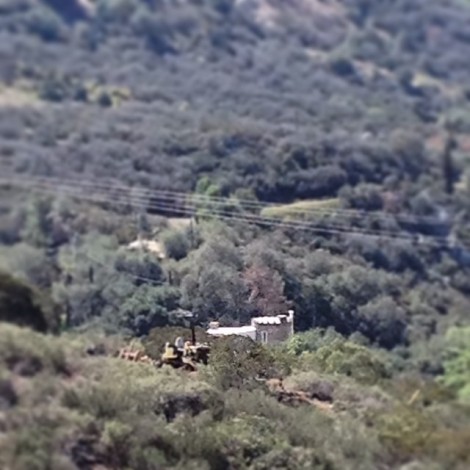 Our next turn was to be off of Lilac, onto a road I remembered started with a “B”, that maybe led to Cougar Pass and maybe we could handle the gravel bits of road to get up and over to Hidden Meadows.  The road is called Betsworth, and it’s mainly flat with some decent grade rollers, with a final descent that is quite steep to what looks like a water district area.  After descending and turning right in hopes of finding a road (and finding only more “Private Property” signs), Jill came upon me with a rather angry face and said, “Let me take a last picture of you before I kill you.  I do NOT want to have to climb out of here!!”

I said, “Look, Jill, a donkey!” (Jill loves donkeys, and luckily one just happened to pop up in the field above).

I ate my pop tarts (I’ve been a low budget snacker lately), and whipped out the trusty Google Maps and pondered.

Surely there’s a way out of this! 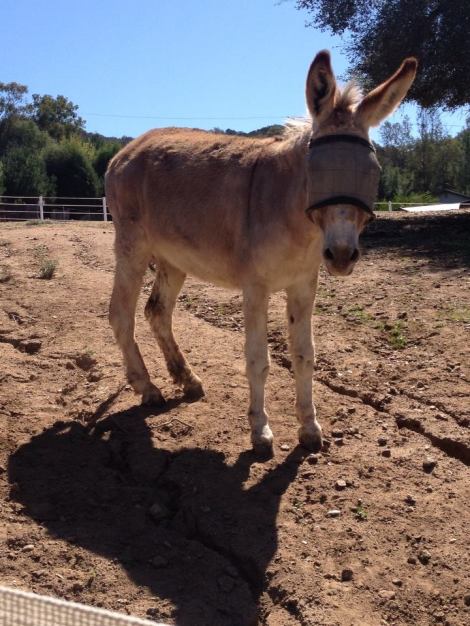 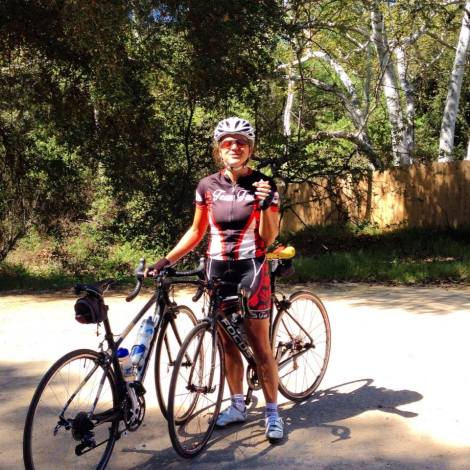 We were mostly resigned to climbing all the way back out to Lilac road when we noticed there was a road around the water district area, and lo and behold, a man in a truck was coming down it.  We were fairly desperate, and although we’d had it with not abiding the law, we figured we’d give it a chance.  Again, I let Jill speak first.  She asked if there was a way through to Mountain Meadows, and luckily for us, this gentlemen felt bad for us, and even though I protested, “But it says ‘No Trespassing'” (all innocent like I always listen to signs), he proceeded to tell us in great detail how to get up and out Cougar Pass.  He also chuckled when I asked how smooth the gravel road was and remarked, “Oh, you’ll be walking up, alright!”  Oh boy.

We, of course, got lost.  We only made one bad turn, but what a mistake it turned out to be!!  A road with >25% grades where we had no hope of biking either up or down safely, but we trudged up because we figured we had to get home at this point.  At the end of the road, it became quickly clear that all the pain we endured was for not, as the road ended into an abandoned house with a very real creeper edge to it.

We took off our shoes to hobble down the road, because it was so steep, I was afraid it wouldn’t be possible in the cycling shoes.  We have the blisters to prove that our wrong turn was a very bad idea.

“Should we try going this way past the yellow gate (he did say ‘yellow gates’), and give it one last shot?  Or should we just give up and go back?” I asked.

“Let’s try it, we came this far,” Jill said.  That wasn’t the first time she said that today.

It turned out to be the right path, and we managed to hike-a-bike our way up that beast, climbing the last paved part at continued insane grades.  I’m not sure what natural force created the roads out there, but I’m pretty sure it was in league with the devil.

We decided to forego our usual hesitation to ride on Deer Springs road, as nothing could seem too dangerous or treacherous after that crazy route we just completed.  We were in “get ‘er done” mode, and pedaled our way south back toward the respite our cars would provide.  Hot, thirsty, dirty and tired, we tossed our bikes in our cars, did a little instagramming, and parted ways.

“It was a little fun after all, now that it’s over,” Jill says.

“The best rides are the ones where you bite off much more than you can chew, and live through it.” ~ Doug Bradbury

One response to “Get Lost! – Valley Center Adventure March 2014”