I have a feeling I wasn’t the only person asking this question in a somewhat frustrated tone inside her head on the rides these last two weekends, but in my case, I’m the only one to blame for that madness.  My excuses are that they are quite beautiful routes in spite of the punishment, and well, it’s nearly impossible to avoid hills around here (although, I could try a little harder, I think).

We have had some great turnouts for the start of the year rides, with 24 riders on January 17th for the Solana Beach start, and about 15 in the group on January 24th for the REV Endurance Cycling start in San Elijo.  Michell wrote up some posts on Facebook for the C groups for each meeting, and she said she’d like to hear the story of the other half of the rides…. I’ll do my best.

Rancho Santa Fe doesn’t necessarily seem hilly when you drive through the place, but having been through it a time or two (or many dozens), I seem to have a knack for finding the worst ways around (or as those who love hills would say, the best ways around).  We started off with a huge group and a chill in the air at Java Depot on the coast highway, and headed north toward the Manchester Express to Rancho Santa Fe.  I had warned everyone that much of our route today would be single-file only zone, and we were in a nice line all the way out.  Our first hill hit us a little squarely in the lungs on the El Mirlo ascent into RSF proper, but I can safely say no one was chilly from that point on.

I always enjoy RSF for riding because you have the nice mix of challenges, with some flattish areas in between for rest and recovery.  After El Mirlo, we cruised our way over to El Montevideo, past the lake, crossing over Paseo Delicias to what is one of my favorite little jaunts in RSF – the ~2.2 mile “Stud Loop” – and I do prefer it in this direction, which is generally called “reverse”.  I spent four months off my bike last year, and a few months back on with a physical therapist warning me to take it easy, and her voice was getting just soft enough in my head that I decided to let loose and have some fun on this super fast road – downhills, curves, three little uphill punches – what more could a cyclist ask for!  Oh yes, and the road is lined with flowers and citrus trees in bloom, with sweeping views off to the left.  We regrouped at the end of this loop and headed at a recovery pace up through the little downtown of Rancho Santa Fe, and then to the left of the Rancho Santa Fe Inn where we began the twisty downhills of the beginning of what is called the “Enchanted Forest” (in Strava segment language).  There’s definitely a few “gotcha” turns in there where if you get up too much speed, you could easily miss the turn – but everyone proceeded safely, and we worked our way to the south end of RSF and popped out on Via de la Valle.  I always love to take people on this route and here when they finally recognize something – “Hey, I know where we are NOW!” At any given point, you’re only a mile or two from something you’d recognize, but you feel kind of lost in the moment out there.

The next part used to be one of my favorites, but I have to agree with Julie, that the route could’ve done without Las Planideras… The grade hangs steady toward 10% for the first .3 mile, which gets you nice and tired out for the much lower grade climb that finishes out the 1.5 mile stretch.  But I like to make sure there’s always one part of the ride you can really complain about – I think it makes the rest so much more enjoyable!

We especially appreciated the downhills on this ride, and Rambla de Las Flores is a super fun one where your speeds can easily exceed 30 mph – very satisfying after the long climbs!  We had a little steep pitch up to an icky left onto La Noria, which becomes El Camino Real – which we followed for probably too many miles south into Carmel Valley.  I say too many miles because El Camino Real has a knack of following one 1 mile long hill with another, for what seems like forever.  Take it North some time from Encinitas to Oceanside (at a low traffic time) and you’ll see what I mean.  We snuck back over to Carmel Valley Road via a somewhat hidden bike path off Sorrento Valley, and spun our way up to the coast with a collective sigh of relief when we reached that group of purple flowered bushes on the right heading into Del Mar that mean you’ve made it up that last worst one.

An added bonus to our routes this week was that the two groups of riders intersected twice along the way – which happened exactly as I’d hoped.  I figured there’d be a good change we’d cross paths in the opposite direction on Rambla de Las Flores, and also that we’d join up somewhere toward the end into Carmel Valley.  Lucky we did, or I’d have absolute NO pictures from the A/B ride.

We had a large percentage of folks hang out for coffee and snacks at the end, which made for a nice congenial ending to a challenging ride. 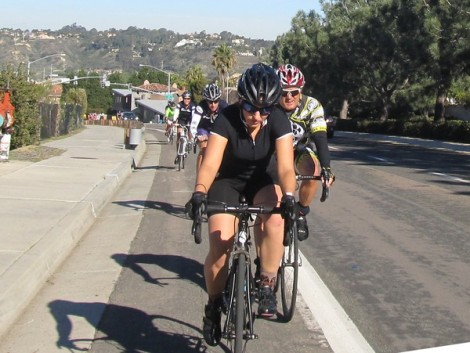 Brielle and Laura with Kim in the back, early in the C ride 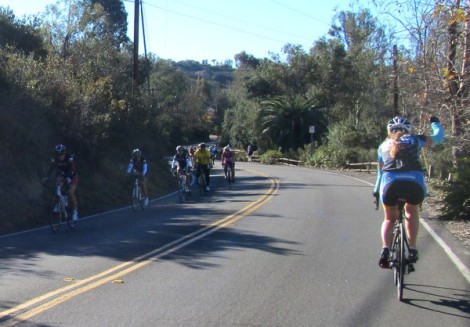 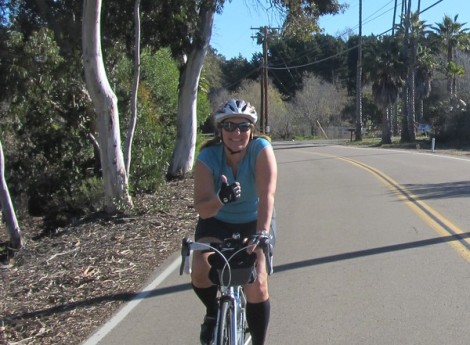 Sara and Lynn working their way through Carmel Valley

During the afternoon on Friday, I received a little message from Michell concerning the Wind Warning published from the inland mountains and canyons.  I used to kind of ignore those things until one day when I ignored one and headed down to Mt. Laguna for what was one of the more memorable, but completely frightening, bike rides of my life.  So I no longer ignore those, and I certainly wouldn’t want anyone else to have to experience a 50 mph cross wind blowing you off the road. If I could guarantee all the winds would be tailwinds, then by all means, let’s do it.

Since we were starting at the REV shop at the bottom of San Elijo, and that happens to be just a few miles from my house, I’m fairly familiar with the surrounds and was able to throw together a route that I thought would have some challenges – but mainly I was focused on heading north into  the wind to start, heading south along the coast with the wind, and then finishing back north and east in a mainly sheltered area.  Some of that worked out.

This kind of route was my bread and butter pre-injury – hill after hill after hill!  George (owner of REV, and cyclist extraordinaire) said to me at one point, “You seem to have found the hilliest route to the coast!” (with which, of course, he was well pleased).  I, out of breath and overly tired, just nodded and in my head I was like, “Would a little route out on Palomar Airport Road would’ve killed you??”  Julie, who led the C group, noted to me afterwards that we were averaging over 100 ft/mile until we reached the coast – that’s some hefty climbing.  It was enough climbing that even when we reached the coast, and the wind was definitely behind us, we were thinking, is the wind against us?  No, that’s just some lactic acid and also, I’m not sure about you, but there’s something about Santa Ana winds that seem to suck the life out of me.  Is it the dryness, the overall heat, or is it the effect on your mood?

Especially hot, dry, and dusty Santa Ana winds are widely believed (in Southern California, at least) to affect people’s moods and behavior negatively. This has not been definitively proven in studies, although limited evidence may point to this conclusion. Even without ironclad scientific proof, it is a well-accepted part of local lore. (From Wikipedia)

Hammering seemed to be the name of the game this Saturday, and I know that I for one definitely felt “worked out” by the end of that 45 miles and >3000 ft of climbing.  Perhaps the most challenging portion was the climb east on Lomas Santa Fe into the wind – usually, with the typical ocean breezes, you get some help climbing this never ending hill.  Not yesterday.

But enough with the complaining already, right?  I feel like my fitness ratcheted up a few notches by the end of that ride, and that’s something to be grateful for – along with the great company.  I am, however, looking forward to next week when we plan to head back to the coast for a much flatter ride with moderate speeds on an endurance building ride to Dana Point (C group will turn around at San Onofre campground).  For those looking forward to the Bandy Canyon ride, we will return to that soon.

A big thank you goes out to George Vargas from REV Endurance Cycling for hosting our ride this Saturday.  You and Lori are inspirations for us!

An uphill start to the ride – through San Marcos 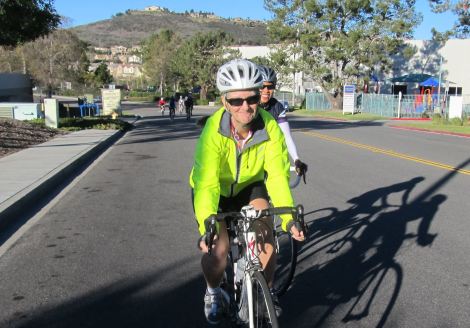 Dede succumbs to Michell’s camera – it’s hard not to smile when Michell takes your picture!

Julie leading the group up yet another hill

Janice taking a break at the top of El Secreto 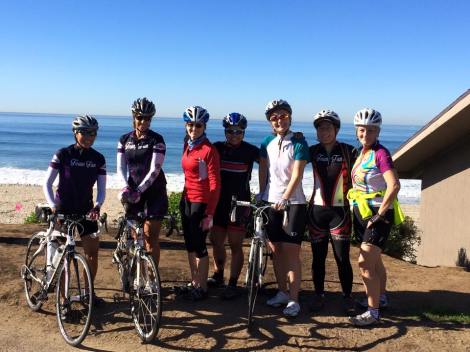 The “A” group cruising down the coast with the REV tandem leading the way.