Last week was a big week for the Swami’s Team Fun crew, starting the week off right with the Temecula Spandex Stampede on Sunday, November 8, and finishing the week with the Ride the Point Metric on Saturday, November 14.  A surprising number of us did both rides, but a special shout out goes to Sarah Rosenberg for completing her first two metric centuries!

The Swami’s Team Fun crew had one of the larger group representations at the event.  Counting both men and women, we probably had around 20 participants.  In an event capped at 200 riders, we represented!

The air was a tad on the chilly side when we arrived in Temecula that morning, but never fear, the air heated up quickly with a strong sun and a route containing more than its fair share of hills.

Most of the group gathered at the start of the ride

There was a good deal of advertisement for this ride that centered around it being a FUNdo, and “not your typical death march gran fondo”.  When near the start a large pack formed that regularly spit folks off the back at the least provocation, and I found myself gasping for air and fantasizing about my inhaler around mile 7, it dawned on me that there may have been a little false advertising on the FUNdo part… or perhaps my definition of fun is different than their definition of fun… or perhaps it would be up to us to keep the ride at the right level of pain to qualify as “fun” (and, at least, not a death march – merely a pain train, if you will). 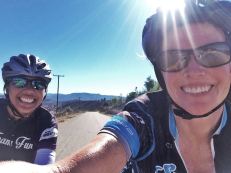 To add to the experience, there was a healthy wind at all times, seemingly coming from whatever direction we were trying to head in.  Furthermore, there were on occasion these sort of crazy steep pitches, and since the route revisited several spots, I had the impression that we hit some of the worst what seemed like many times.

Not to make it all sound like drudgery, mind you.  We settled into small groups, and definitely enjoyed the bucolic scenery, plethora of horses, and for my small group, the draft faithfully provided by my husband, David.

And of course the best part was most certainly the finish!  I haven’t been to such a great post-ride party in a long time.  We enjoyed a very bountiful Mexican lunch (“Would you like two tacos, ma’am?”  “No, I’d like as many as you can fit on the plate.  Please.”), and most of us enjoyed at least one delicious glass of Lorimar wine.  They had plenty of tables set up and lots of chairs, so we managed to all gather up at the end to enjoy the post-ride meal together. 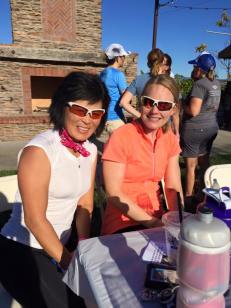 Soo and Brieller enjoying the after party

Suzanne shows off her battle scars 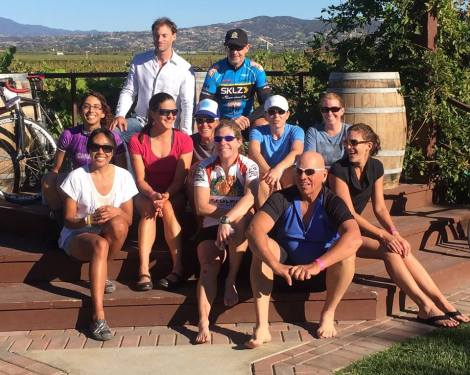 Swami’s member Troy Huerta put out an announcement for this ride several weeks back, and then early last week asked me to see if anyone in our group would be interested in the ride.  I hadn’t looked too closely at it previously, but upon closer inspection, I decided it looked like just the ticket for our “Exploration Ride” Saturday.  Many of you know that Point Loma is one of my favorite places to ride, so it was hard to pass up this ride.  In addition to enjoying endless coastal views, we had the opportunity to climb the seemingly neverending Ashburn Road climb, which is in the military base portion of the Point that is typically closed off to civilians.  The designers of this route knew how to hit the hills hard and hit them early!  Pretty much right after the Ashburn Road climb, we were directed down Tide Pool hill for another doozy of a climb.  We got a bit of a break meandering through Sunset Cliffs, and then right when you were starting to get comfortable, the volunteers directed you onto the steepest portion of the infamous Hill St. climb.

Heather B and Janice heading under the arch at the start of Ride the Point. 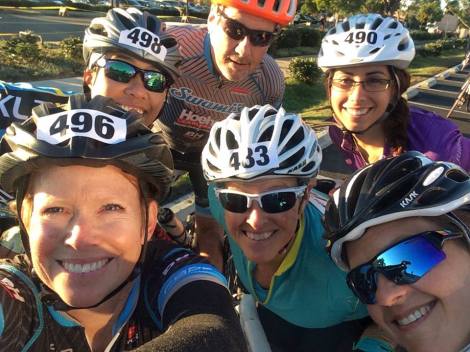 Clockwise from left front:  Jill, Janice, Donn, Sarah, Kim and Heather B gather for a group selfie at the start.

You couldn’t fault the Ride the Point organizers for the number of rest stops and enthusiasm of the volunteers.  The first stop was in Cabrillo National Monument, just following the Tide Pools climb.

After a little loop around Mission Bay, we headed east toward Mission Gorge.  I started to get pretty excited when we took the Ocean Beach Bike Path east instead of west from Pacific Drive – we were entering undiscovered territory for me!

It was somewhat of a long haul out to Mission Gorge, but it was worth the effort.  The route took us on the road through the main part of the park.  Many of us had not been there before, and it left me thinking that I would try to sign up for the trail run that’s held there in the summer (although it has to be impossibly warm). 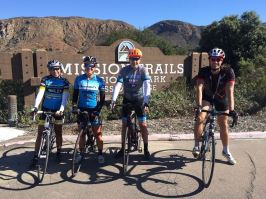 The return trips on out and backs always seem a little sad, kind of like the flight back home after a fun vacation.  This particular return trip was somewhat hectic, as it weaved us through the Mission Valley mall area.  We all made it back to Point Loma in one piece, grateful for another beautiful day on the bike with good friends. 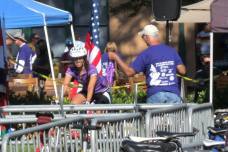